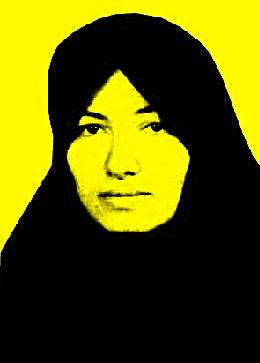 Unite against the regime of stoning and flogging, 18 September

In this guest post, Shreen Ayob urges readers to join a protest this Saturday in London

(outside the National Gallery)

Sakineh Mohammadi Ashtiani, a 43-year-old Iranian woman with two adult children, was sentenced to stoning for adultery in 2006. Since then, she has been imprisoned and flogged.

An entire international campaign sprung up in retaliation to this barbaric judgment on Sakineh after her children wrote a compelling open letter to the international activist community. Free Sakineh! No to stoning! we all shouted on streets around the world. For many of us the campaign ideology is simple; stoning equates to torture. No-one deserves to be tortured.

But when the Iranian authorities made promises of execution by hanging rather than stoning, we were still outraged that anyone should be killed at all over this private matter (incidentally, a woman in Iran is not allowed to divorced her husband without his written permission, which is really only the tip of the iceberg when it comes to legal unfairness in this case and the inherent misogyny of Iranian legislation).

Carla Bruni-Sarkozy recently condemned the stoning by writing a compassionate and heart-felt open letter to Sakineh. The reaction from one Iranian newspaper was to insult Carla’s legitimacy to condemn the stoning, due to her own chequered love life. The article was headlined “French prostitutes enter human rights uproar” and also made reference to the actress Isabelle Adjani, who has joined the calls for the release of Sakineh. This was such an idiotic response that even the Iranian government had to restrain its media from further attacks. “Insulting foreign dignitaries like Carla Bruni-Sarkozy is incorrect and not sanctioned by the government,” Ramin Mehmanparast, spokesperson for Iran’s Foreign Ministry, said.

The next revelation to shock Sakineh’s supporters was the Iranian authorities’ horrific reaction to a photo published in The Times. The newspaper published an article about Sakineh alongside a photo of an unveiled woman they thought was her. This photo was not Sakineh, but in fact a Swedish political activist called Susan Hejrat. In an open letter from Sakineh’s son, we learn that Sakineh was sentenced to a further 99 lashes on charges of spreading corruption and indecency as a result of this mistake. This was careless journalism, especially in such a sensitive case as this, yet we place the blame squarely on the Iranian authorities for their reaction, and not on The Times.

Yet another controversy is the recent spate of misinformation being spread about Sakineh’s plight. Information has the potential to endanger Sakineh directly and indirectly, as we have learnt from The Times’ photo controversy. There has been a media blackout in Iran over Sakineh’s story, so we have to rely on accurate and professional journalism outside of Iran to keep us up-to-date. BBC1 recently held a debate about cultural relativism. The presenter repeatedly relayed incorrect and harmful information about stoning in Iran, and about Sakineh’s innocence regarding a previous murder trial (Sakineh was acquitted back in 2006). Human rights activist Maryam Namazie, who was due to be interviewed on the show but was not given the opportunity, wrote a complaint to the producer. His response shows a dangerous lack of compassion to Sakineh’s plight and undermines the campaign to free her. Namazie has now taken the complaint to a press complaints body. In failing to correct their mistakes on air, the BBC are breaching two very basic points from professional journalist ethic codes: “admit mistakes and correct them promptly” and “show compassion for those who may be affected adversely by news coverage”, from the Society of Professional Journalists’ code of ethics.

We, all supporters of Sakineh and opposers of torture, call you to action. A protest will take place at 12pm midday September 18 at Hyde Park Corner in London. Please join us, make your own banners, posters, bring your cameras and video cameras. Spread the word and let’s maintain the incredible momentum this campaign has created to keep pressuring the Iranian authorities to back down.