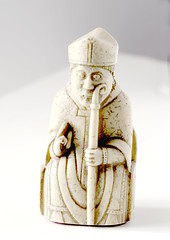 Five male Anglican bishops have resigned from the Church of England and will join the Catholic church in protest at the prospect of women becoming bishops, which should happen in around five years’ time. This follows the Bishop of Lewes’ statement last week in which he claimed that those opposed to the changes felt like they were “in January of 1939”. Yes, women becoming bishops really is as frightening as the Third Reich.

Those against female clergy were previously able to avoid having anything to do with them by seeking religious guidance from “flying bishops” who were themselves male and had not endangered their souls by ordaining women. However, this arrangement will come to an end when women gain the right to become bishops.

Speaking on Channel 4 News earlier, one of the defectors said he supported the social ideology of inclusiveness (his lawyer and doctor are both women, fancy that!), but that this was about spreading the word of god and apparently Christian doctrine and tradition only allows men to do so. As a non-religious feminist I’m sceptical about the existence of god and the value of basing present day decisions on ancient texts and stories full stop, but that’s no basis for an appropriate contextual argument against this assertion. So I’d love to hear what Christian feminists have to say on the subject – please share your thoughts in comments!

I will not be publishing any comments that do not fit this remit.

Image by Adrian Midgley, shared under a Creative Commons Licence.