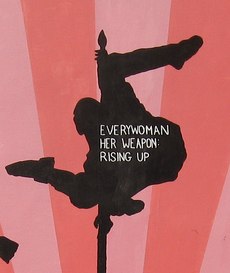 Is it feminist to…?

Any feminist who has done interviews with the media will tell you about the frequency with which journalists will ask “is it feminist to [insert activity]?”.

Some interviewers, indeed, have been known to simply email across a list of stuff to be judged “feminist or not”. Somehow the idea has entered the consciousness that feminist activists are only too happy to set up impromptu Committees To Interrogate Women’s* Anti-Feminist Behaviour.

These questions implicitly present feminism as yet another yardstick against which to judge and castigate women. I think that speaks to the frequency with which we experience this spectre of the impossible ideal woman, in this case not framed in terms of (to take a common example) “is she beautiful enough?”, but in terms of “is she sufficiently liberated?” I would hazard a guess, this is not what the personal is political is meant to result in.

Moreover, do you have to achieve a certain amount of liberation, whatever that looks like, in order to be an effective advocate for feminism (to borrow bell hooks’ preferred phrase)?

Is being an individual ‘liberated woman’ really even possible? In such a society which structurally oppresses women (in terms of gender, but also intersectional oppressions must come into the equation here too). The myth of the lone feminist superhero.

Anyway, this is a very long introduction to Melissa’s post at Shakesville, breaking down some of the reasons why a womanist/feminist might want to change their name if they get married. Which is a very good practical example of how things are much much more complicated in reality than some sort of simplistic how-to guide: follow these steps (and these steps only) to achieve a state of liberation.

*Personally I have never been asked in an interview, “is it feminist for men to do [activity]?”

Image of mural showing “Everywoman: her weapon, rising up”. Shared on Flickr under a Creative Commons license by moirabot