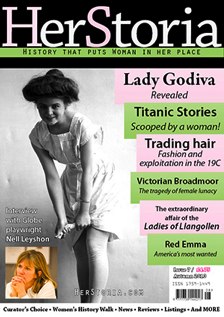 Back in September, we ran a competition to win three free subscriptions to HerStoria Magazine, which concentrates on “History that puts woman in her place”.

Anyway, because of how monumentally busy I’ve been, I’m only now telling you who won this competition – the winners now have their free online subs, and are hopefully enjoying them :-)

Judging this competition was a bit more difficult than I’d imagined. In fact, it was only when I was reading through the entries, that I realised quite what I let myself in for. So as a preface and disclaimer: I’ve only done a basic level of internet research on the winners.

However, here are the winners and the rationale for why they were chosen.

The first winner is Kate, who nominated by her granddaughter Agnes Maguire. Kate explained:

All too often, the study of history focusses solely on the privileged few. It does not acknowledge that our world has been shaped by the lives of ordinary people. Not one of us is insignificant; every person helps mould the course of history.

As an example of everywoman, I would like to nominate my maternal grandmother, Agnes Maguire. Despite being a bright student, she had to leave school aged 14 to work at her local Co-op and help support her family. In her late 20s, she married and had 6 children, raising them on her husband’s tiny miner’s wage. In her 50s, when the children had grown up and moved away from home, Agnes went to college and trained to be a primary teacher. While she was working, my grandparents continued to live on the miner’s wage and saved what money she earned, later using it to buy a house when they retired.

In retirement, Agnes became an active member of a local communities group, Opportunities In Retirement, and attended many classes, taking up new activities such as yoga, Tai Chi, carpet bowls, painting, writing and scrabble. Now 92, she is still a fiercely independent and

active woman. I find her an inspiration.

Kate said it so well: the conventional study of history focuses overmuch on the privileged few.

The next winner is Emilie, who nominated Henrietta Lacks. Henrietta was a young black woman who died of cervical cancer. Cells from the tumor were collected – without permission – and used to grow the first human cells in a laboratory. Her family did not find out about this until 25 years after Henrietta’s death.

Lacks’ cells had a tremendously influential role on medicine, but her story raises numerous questions of consent and ethics in medicine, as well as race and class. Rebecca Skloot recently wrote a book about Lacks, partly in response to the paucity of information.

This quote from the book, where Skloot recalls the university class where she first heard about Lacks, sums up the situation:

Her cells were part of research into the genes that cause cancer and those that suppress it; they helped develop drugs for treating herpes, leukemia, influenza, hemophilia, and Parkinson’s disease; and they’ve been used to study lactose digestion, sexually transmitted diseases, appendicitis, human longevity, mosquito mating, and the negative cellular effects of working in sewers. Their chromosomes and proteins have been studied with such detail and precision that scientists know their every quirk. Like guinea pigs and mice, Henrietta’s cells have become the standard laboratory workhorse.

“HeLa cells were one of the most important things that happened to medicine in the last hundred years,” Defler said.

Then, matter-of-factly, almost as an afterthought, he said, “She was a black woman.” He erased her name in one fast swipe and blew the chalk from his hands. Class was over.

Not every story we can tell about women in history is an inspiration of triumph over adversity, and most stories are complex and reveal uncomfortable realities about the times. But it’s still important to tell those stories. From a Guardian story:

Loretta Pleasant – no one knows how she became Henrietta, says Skloot – was the great-great-granddaughter of slaves and worked in tobacco plantations herself. She loved dancing and was described by a relative as “the sweetest girl you ever wanna meet”. She married David Lacks, a fellow worker and cousin, and the couple later moved to Baltimore in search of work.

After giving birth to her fifth child, Joe, Henrietta revealed that she was suffering serious bleeding. She was examined by doctors at Johns Hopkins – the only hospital in the area that treated black patients – and was eventually diagnosed with cervical cancer.

A sample of her tumour was taken and given to Dr George Gey, a researcher at Johns Hopkins University School of Medicine. Gay had been trying for decades to find ways to keep human tumour cells alive in test tubes so that he and other researchers could use them to uncover the causes of cancer and various illnesses.

Finally, Victoria is the last winner, with her suggestion of French women’s rights activist Olympe de Gouges. As Victoria explained:

Olympe de Gouges was one of the earliest women’s rights activists. She wrote her polemic ‘Declaration of the Rights of Woman and the Female Citizen’ in 1791, in response to the new French constitution (a year before the publication of Wollstonecraft’s ground-breaking ‘Vindication of the Rights of Woman’). She was driven by frustration and disappointment at the constitution’s exclusion of women’s suffrage.

Born into a working class family in 1748 and without an education she rose to be a famous playwright. She was a courageous political activist and thinker who campaigned for many causes, writing numerous pamphlets, manifestos, plays and essays. She championed issues such as democracy; abolishing slavery and capital punishment; rights for illegitimate children; income taxes; help for the poor; ending political persecutions; and the French Revolution. She was passionate about gender equality, including rights for abused and abandoned wives; custody of children; sexual freedoms; divorce; and legal and property rights for married women. Olympe memorably stated, “A woman has the right to mount the scaffold. She must possess equally the right to mount the speaker’s platform.”

After her divorce she did not marry again but chose to live with her partners, defying the convention of the time. Ridiculed for her poor, provincial background and her ‘extreme’ views she was slandered as a ‘libertine’ woman.

Her advocacy of progressive issues and her criticism of Robespierre and the Terror resulted in her arrest and execution in 1793. Radical and fearless to the end, Olympe was ahead of her time.