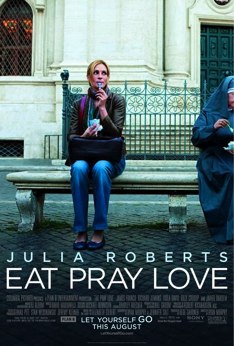 Eat Pray Love, the film adaption of bestselling author Elizabeth Gilbert’s post-divorce quest for enlightenment, has bored critics and spurred misogynistic diatribes about self-obsessed women. Some feminists have leapt to defend it. Others find the film’s message damaging to women.

BBC film critic Mark Kermode was even less kind. “An over-privileged woman learns that learning to love yourself is the greatest love of all,” he blogged, sarcastically of course.

But since when is self-obsession banned from cinema? As a young feminist, it seems to me that mid-life crises are amusing or fascinating if they happen to men, like John Cusack in Hot Tub Time Machine, Kevin Spacey in American Beauty, not to mention most Woody Allen films. By contrast, a crisis is intolerable from Gilbert, even when banished to the chick flick category. And there’s no question that the Eat Pray Love audience is predominantly female, except for the bored-stiff male film critics.