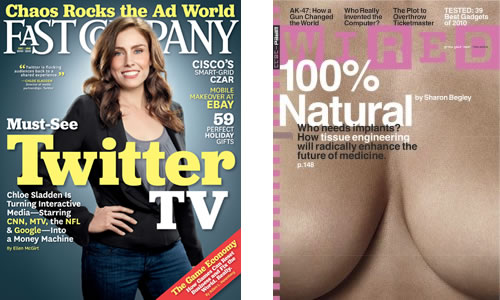 Women in tech, on the cover

Business magazine Fast Company is calling for nominations to its list of the most influential women in tech.

I think this bares highlighting given the recent controversy over Wired Magazine’s failure to run cover stories on women (as highlighted in yesterday’s round-up, prompted by the above-right cover). The US version of the magazine has not put a woman on the cover for her Wiredish accomplishments since 1996.

You can also browse through Fast’s list of Most Influential Women in Tech 2010.

It’s interesting that the magazine is directly celebrating its coverage of women in this space, and their post calling for nomination references Wired editor Chris Anderson’s comment that there are:

not enough high-profile women in the tech industry who are recognizable to sell a cover.

Fast Company is differentiating itself, then:

The idea, as always is that these women bring a unique brand of thought to the tech space, whatever business they’re running at the time we feature them. And our coverage of women in tech flows from the pages of our magazine to our website and back again. Case in point: our December/January issue which features Chloe Sladden, who manages Twitter’s media partnerships, on the cover (it goes on sale next week).

Now it’s time to begin putting together the 2011 list of influential women in tech, and this is where we’ll need your help–since there are those who still believe there aren’t any recognizable women in the tech industry. We’re opening a call for nominations, and we’re accepting them through all forms of social media, using the hashtag #wit11.