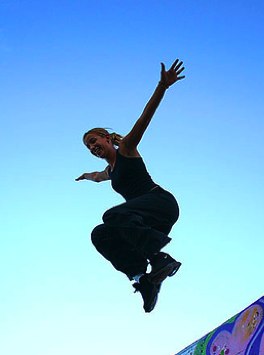 Changing our relationship to our bodies

Women’s messed-up relationship to our bodies has been exhaustively documented.

Jezebel has up an interesting post which looks at how some of their readers have shifted from viewing their bodies in negative ways, towards, as one commenter put it, viewing their body as a tool.

Primarily the stories focus on sport and exercise as a means to achieve this – and acknowledges the “exercise privilege” inherent in that as a statement. But there are also stories like 14KgoldNYC, who talks about the body as a tool to perform music (in this case, singing).

One reader, Slaybelle, says of her experiences with roller derby:

It wasn’t until I started playing that I really switched my view of my body from this thing I inhabited to a machine that I used.

And another reader talks about her “Slayer training”:

So almost a year ago, I was watching Buffy-and this is pretty cheesy. I’m not really a competitive, sportsy person. But I am a rookie feminist. And I was watching an episode of a show (a flawed, imperfect show) about a girl running fast, being super fucking strong, and generally being a super-hero. And I thought, I want that. I can do that. I can be a Slayer. And so I started doing Slayer training every day. I started thinking about my body as an amazing gift that I should be training to the best of my ability to be strong, to be fast, and to be healthy. 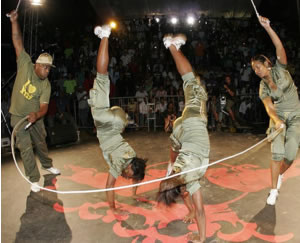 Meanwhile, Jenn at Reappropriate revists the issue of women steering clear of all strength training in the gym, out of a sort of gender-panic fear of acquiring giant ‘unfeminine’ muscles. As she amusing observes, this sees “boys flock to the free weights and benches while girls congregate at the cardio equipment, running like over-sized hamsters on their wheels”. (My gym seems less extreme than this, but even so, there normally are a lot more men in the weights section – what are your experiences?)

She talks through mostly how extremely unlikely this is to happen, as well as why strength training is important:

Building muscle is extremely difficult, as any strength trainer will tell you. Even men, who have the benefit of testosterone, struggle to bulk up. What makes a woman think that a few sets on the bench press will magically build the kind of physique that any Mr. Universe would envy?

(Of course, we’ve visited this territory before, with musings about the gender implications of push-ups, evidence that negative body image is preventing school-aged girls from exercising, failures of the sports bra market, etc.)

Photo of woman jumping (parkour) by Marco Gomes, photo of women cartwheeling through skipping ropes by seo2, both shared on Flickr under a Creative Commons license