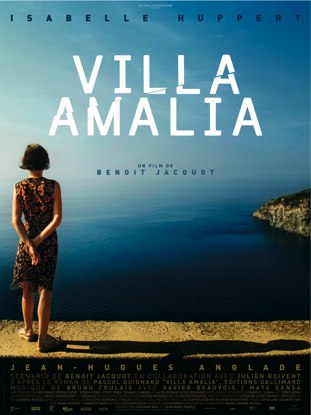 Composer Ann Hidden discovers her partner cheating on her – uproots her life and moves to Italy. Villa Amalia is refreshingly free of homilies and simple explanations, but Gloria Dawson finds it too enigmatic

Composer and pianist Ann Hidden (played by Isabelle Huppert) discovers her husband is cheating on her and decides not just to leave him but to change her life utterly, in Benoît Jacquot’s 2009 film Villa Amalia.

The film is understated, fluid and elusive; sometimes too elusive, in fact – it contains many short, enigmatic scenes, and doesn’t feel quite solid at the end. The first scene, however, is captivating. The opening shots are from inside and outside a car, driving through wet streets at night. Ann’s face looks anxiously back at us in the rear-view mirror. It feels like a crime film, and as the camera follows her as she leaves the car, we sense something appalling is about to happen. Two shocks come next; she sees a man (we assume, correctly, her partner) kissing a woman in an upstairs room. Then a man approaches from behind, speaks to her. He suggests she is watching the house because she plans to rob it – she agrees, rather than tell him the truth, then he reveals that he is Georges, a childhood friend. This intervention allows the focus to move immediately from the betrayal to the rediscovery of a friendship. Ann later rewrites the incident on her terms: “I saw nothing that night… I saw you.”

With a rigid expression and total control, Ann proceeds to dismiss her partner, Thomas (whom she describes to Georges only as “the man I live with”), sell the house and pianos, cancel her professional work and prepare to leave. Yet the leaving seems to drag on – in fact, it takes over half of the film. Ann’s relationship with Georges deepens. This delay, and the difficulties it reveals, feels far more honest than the high drama of a quick getaway. The undoing of a comfortable life is complex. “It’s hard to disappear these days,” Ann says wryly, as yet another part of her ordinary, affluent life is parcelled away.