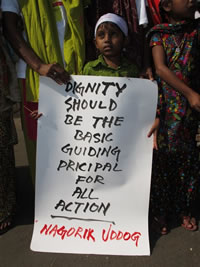 Women’s rights ARE human rights – but for some, those rights are more attainable than for others

Bridget Phillipson MP travelled to Bangladesh as a supporter of One World Action’s More Women More Power campaign, which seeks to give voice to the world’s most marginalised women. You can contact Bridget directly on Facebook or Twitter.

For most women in the UK, when we imagine smashing through the glass ceiling, we think of a time when the successful women of the business world will sit in equal numbers alongside their male colleague on executive boards. When differing levels of maternity and paternity rights will be a memory left in the wake of parental leave. When we will have reached the promised land of equal pay.

But, when many of the world’s women raise their eyes skywards, the glass ceiling of Western feminist imagery is not even visible, never mind attainable. When one in eight women in Sierra Leone are dying in pregnancy or childbirth, parental leave is a distant pipedream. When women’s economic rights to own land or to inherit property are trampled the world over, the campaign for equal pay must still seem like centuries away.

Women the world over face complex layers of discrimination, exclusion, isolation and danger that many of us can fortunately only imagine.

But the reality was really brought home to me on my recent visit to Bangladesh with One World Action. As a supporter of their More Women More Power campaign, I wanted to meet with the women they work with who struggle against multiple layers of discrimination and disadvantage to change their own lives for the better. This journey led me to the Dalit colonies of Dhaka.

The oppression of Dalit people is one of the most severe and forgotten human rights abuses of the 21st century. Strict caste structures in some countries place Dalits at the very bottom of society – as ‘untouchables’. The vast majority of the world’s 250 million Dalit people live in extreme poverty, without land or opportunities for better employment or education and are amongst the world’s poorest and most excluded people.

However, as I soon learnt, we cannot talk about the human rights of Dalit people, without also campaigning for the women’s rights that are so easily denied to Dalit women. Doubly discriminated against because of their caste and their gender, Dalit women have found themselves to be on the very bottom rung of the lowest ladder in a rigid social hierarchy. These multiple layers of disadvantage have left more than 90% of Dalit women in Dhaka’s colonies illiterate and a staggering 83% of Dalit girls drop out of school.

When I met members of the Dalit Women’s forum in Dhaka, they told me that they wanted to bring about change in their own communities – tackling domestic violence and early marriage, proper sanitation and schooling for girls. They are demanding action from their own government but want international recognition of their plight. Inspiring community organizers such as Moni Rani in the Women’s Forum and Sonu Rani, who at 21 was the first Dalit woman elected to the local council, are at the forefront of fighting for change. They are incredible women and won’t give up until their government acts. However, without the political will at the top the full benefits of this won’t be felt across Bangladesh and we need out government to play their part and ensure progress.

Today is the International Day of Human Rights and as feminists, we must remind the world that women’s rights are absolutely indivisible from human rights. But we also have a responsibility to our sisters around the world to remember that, for the privileged few, women’s rights are more attainable than for others. I for one will be using this advantage – including my voice in Parliament – to speak up for those women who face a level of discrimination and disadvantage that I can barely begin to imagine. I hope that you do too.