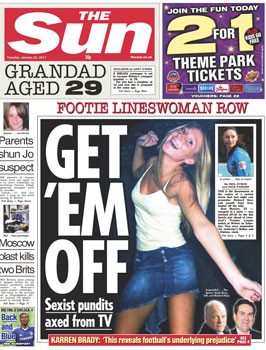 Guest post by Matt Hill, who thinks men can – and should – be feminists too. He helps edit the politics and music website Green Wedge, and writes for various sites.

Personally I find it hard to get too exercised about the scandal that’s erupted over the last few days, surrounding two Sky Sports pundits who have lost their jobs for making sexist comments about a female official. Richard Keys and Andy Gray, who presented Sky’s flagship football coverage, were caught out on Saturday when some comments they made about Sian Massey were passed to the Mail on Sunday:

Keys: Well, somebody better get down there to explain offside to her.

Gray: Yeah, I know. Female linesman. Can you believe that? [. . .] They probably don’t know the offside rule.

Gray: Why is there a female linesman? Somebody’s fucked up big.

(There’s more, and those in need of edification can hear the whole thing here.) ‘The comments were pathetic, but the media ritual of punishment and debasement that follows such incidents is almost as insulting. First there’s the manufactured ‘outrage’ from those crusading feminists at the Mail on Sunday. Then the insincere ‘sincere apology’, which nobody is even expected to take seriously. Finally expect a period of purdah for both men before, a decent interval elapsed, they sign a big contract with one of Sky’s rivals. And we all learn a very important lesson about turning your microphone off before speaking your mind.

Anyone who’s spent any time in an all-male environment will hardly be shocked by what the tapes reveal (though I admit some more footage of Keys, where he describes sex with a woman as “hanging out the back of it”, is as vile as anything I’ve heard in a football changing room).

I finally decided I’d had enough of playing football and the pitiful bravado that goes with it on my way to a university match a few years ago. Evidently mistaking me for some species of reptile, a team-mate boasted of how he’d invited a girl back to his house the previous night, only to throw her out in the street at 2am when the main business of the evening was finished. “What a legend,” somebody else added. (These weren’t uneducated kids but students at a famous university: one is a doctor now and the other a lawyer.)

But my all-too-extensive experience of male-only culture – over many years of playing football, and two harrowing years at an all-boys school – taught me one thing: the main driver of sexist attitudes in male-dominated spaces is fear of women. Inside every nasty sexist bully is a little boy who wishes he could talk to girls, but doesn’t know how. After all, it’s easier to retreat into a familiar male world, where everyone can unite in deriding women, than to try and understand them.

Look at the video of Keys’s remarks, if you can bear to. You’ll see an archetypal beta-male trying to impress the cool kids by outdoing them in sexist abuse (with a vaguely homoerotic sexual compliment thrown in for good measure). It’s a classic case of a group reinforcing its identity and self-esteem by picking on those who are outside it, with the weakest member gaining most from such ‘bonding’.

To say that the men’s behaviour is pitiful rather than threatening isn’t to excuse it. There are too many terrified little boys who’ve risen to positions of influence in society – think of the lawyer and the doctor – where they can menace others with their antediluvian attitudes and leaden ‘banter’.

But it does mean there’s nothing inevitable about such behaviour. In a more equal society where men and women are taught to respect rather than fear each other, occupying the same spaces at school and work, I believe such attitudes will largely wither away.

That day would come sooner if the media spent more time focusing on issues like the gender pay gap and sexual violence, to name just two. The travails of Richard Keys and Andy Gray bespeak a media culture that’s much more concerned with regulating its own language about gender than in describing the real lives of women.

That’s not to say such taboos aren’t useful. As comedian Stewart Lee says, political correctness is an “often clumsy negotiation towards a formally inclusive language”. The fact that Richard Littlejohn is upset shows the system’s working – see his next column for more entirely predictable effusions on the subject. And hopefully a few common-or-garden office bullies will now think twice before imitating such micro-aggressions.

But I suspect many women will react to these events with a sigh rather than the outrage mandated by the press. After all, ordinary women have more important things to worry about than the puerile nonsense of two contemptible men.