T-shirts for boys – gender stereotypes and the flipside of ‘pinkification’

T-shirts for boys value toughness and aggression, feature frightening imagery and emphasise rowdiness, according to a survey by The Achilles Effect.

The parenting blog has posted a two part series looking at the artwork on t-shirts marketed for boys as young as six months old – part one looks at designs valuing toughness and aggression, while part two focuses on t-shirts which reinforce negative stereotypes of boys as “brats”.

We often look at the negative messaging in clothes marketed for girls, with campaigns such as Pink Stinks! chipping away at the issue. In fact, when we talk about gender stereotyping of this nature in products and toys ‘for girls’, we reach for a comparison with the better products marketed for boys.

We also talk about the social pressure boys and parents can experience if they reach for clothes or toys that have been coded as feminine.

But it’s interesting to read Crystal Smith’s posts analysing the negative messaging aimed specifically at boys; the flipside of all the pink and princesses aimed at girls. She says:

As adults, we need to evaluate the messaging in the clothing we buy, just as we do for the books we give our sons and the television programs we allow them to watch. Before purchasing a shirt with harsh, stereotyped imagery, think carefully about the message it sends. Does a 5-year-old boy need a shirt that tells him he is a brat? Does he need one with a frightening image that tells the world how tough he is?

Meanwhile, a mother and father have launched a Twitter account documenting the differences in how people treat their three-year-old girl and three-month-old boy. Some recent @GenderDiary tweets: 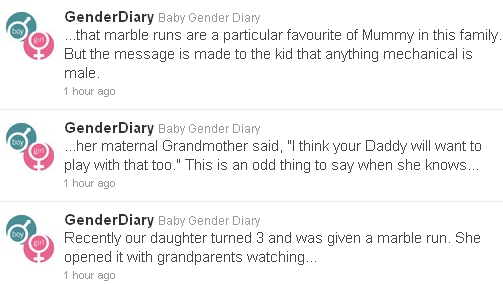