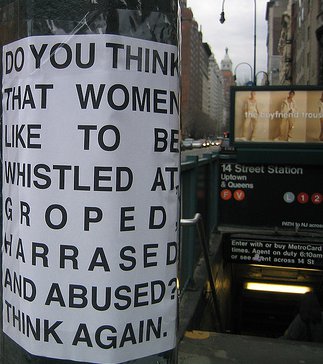 Signing into MSN to read my email the other day, an annoying window popped up telling me what rubbish I could read on MSN. Doubtless these articles are mostly always nonsense, but I was shamefully intrigued by ‘Secrets girls don’t want guys to know’. I have no idea what I was expecting but what I found was absolutely incredible, and definitely not in a good way.

I had read no more than the first point before I was completely stunned and couldn’t believe what I was reading:

1.When we get whistled at in the street, we feel uncomfortable and we’ll always tut and roll our eyes. But we’re awesomely flattered and we’d be gutted if it stopped.

‘We’ of course, relates to women – and women are all the same, aren’t they? According to this story, women are formulaic and can be summed up in a few points which all relate to them being selfish little girls pining for male attention.

Perhaps I’m speaking out of turn when I disagree: I think that being wolf-whistled at by anyone in the street is degrading, annoying and humiliating. Doesn’t everybody have the right to walk down a street without being viewed as a piece of meat?

Those that argue that it’s a compliment ought to think about what is being complimented and why they value a random person’s perceived opinion.

In my experience, this usually occurs when I am walking alone and the wolf-whistler will be in a pack, surely an indication that the ritual is related to exerting a show of power to the rest of a group?

Tried reasoning with a wolf whistler? Tried ignoring them? Abuse tends to be the response.

I acknowledge that wolf-whistling is in itself a very tiny blip on the landscape of issues which serve to denote a patriarchal and sexist society; it can be ignored and you can let it go. However, it is the way in which the author presents women’s apparent appreciation of wolf-whistling that worries me. It is that old cliché of women say one thing, they mean another. Women say no, but they really mean yes. And that any male attention is and should be valued by women.

I’m aware that the analogy I am making is a little extreme, but surely the little things condoning that sort of attitude allow it to continue. This builds up and leads to disregarding women’s opinions and thus condone much bigger, obvious issues such as rape.

The ‘article’ in question is also an advert for match.com therefore obviously shouldn’t be taken seriously as a piece of journalism with integrity, in fact after reading the rest of the ‘points’ it could be viewed as quite an interesting parody and joke (although unfortunately I think it really is meant to read as being insightful). The problem is, as it was promoted on MSN, which has a massive audience due to the number of Hotmail users, it has been given a huge platform with which to parade this chauvinistic attitude towards women.

Photo of sign on a lamp post by a New York subway station, reading: “Do you think women like to be whistled at, groped, harassed and abused? Think again”, shared on Flickr under a Creative Commons license by airmoore