Debates on the C-Word

Warning: I am going to use the C-Word in this post so please don’t read on if you don’t like to see it. 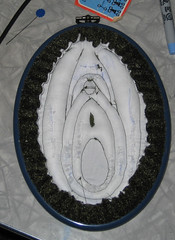 There are some very interesting posts from Laurie Penny and Harpy Marx about the swear word that still seems to have the most power to shock. In my enthusiasm about any feminist efforts to reclaim it, I possibly misframed Laurie’s post a little when I commented, as it seems one thing she and Harpie Marx are agreed on is the power it possesses.

I accept there isn’t a “right” answer to this issue but, rather than embracing that power or throwing the word out because of the way it has been used against women, my own personal preference would be to neutralise it.

While Harpy Marx’s post is as well argued as I would expect, I have to admit I tend to feel a bit defensive when I see a woman making a case against the word cunt. I find myself torn between wanting to respect her boundaries regarding a word associated with womanhood that could therefore arguably impact on both of us, and my own preciousness over the fact the word has never shocked or hurt me personally as a woman. For me, it is just a word for a vulva and however much a misogynist might like the idea of it offending me, it really never has. I very much want to keep it that way and when I sense a degree of reticence being cultivated, I become resentful about the disadvantage I think it might leave me with.

It makes me squirm when men apologise for using the word cunt in front of me. I realise some of those men will be making an effort to respect certain feminist objections to the way the word has been used to oppress women but, in my experience, many more will reveal antiquated and unhelpful ideas about feminine delicacy. This leads me to the strategy of making it clear that I find such ideas far more sexist and offensive than a word for a part of my own body. This isn’t an invitation to be rough-housed or verbally abused to make some boorish statement about so-called equal treatment. Like plenty of other women and men, I don’t appreciate aggression from anyone. I just don’t object to a word that I am all too aware men may or may not use around me in order to prove a point.

I see what Harpy Marx and some of her commenters are saying about how “cunt” has been used historically but I think we have everything to gain from it losing its power to shock any more than any other swear word. (I don’t really have a problem with not being able to swear in certain contexts. It’s just the extra amount of power reserved for one particular “female” word that I take issue with as a feminist.)

We all know cunts are no nastier than pricks so if someone bitterly spews out “cunt” as if they are, I’d personally say “more fool them”. That said, it’s also obvious that I have no more right to tell another women not to be offended than she does to tell me I should be. I’d simply suggest that not being wounded by that word itself can sometimes enable us to move forward and critique the attitude that is sometimes behind its delivery.

Despite the above, any comments informing me I am a cunt will probably not be published. Apologies to any passing trolls who may feel suppressed by this ;-)

Photo by crafty_dame, shared under a Creative Commons Licence.

Addendum: I was not at the public meeting referenced in Laurie’s New Statesman post so it would be appreciated if any comments could continue to concentrate on debates about the general use of the word being discussed, rather than any disputes connected to that meeting.