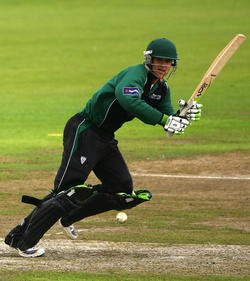 Just a quick post, but after the sexism in sport shenanigans and various discussions about homophobia in sport recently, I wanted to congratulate England wicketkeeper Steven Davies on coming out today.

So few sportsmen at the top of their game admit to being gay (Gareth Thomas, the rugby player, is out, coming out in the twilight years of his career – edited to note that this was an incredibly brave step on his part and Davies has given him credit for acting as a role model for him), although as I said in my previous article, several sportswomen have done. I am really pleased for Davies and hope that his colleagues are all as supportive as his England coach Andy Flower, who’s given him his full backing while stating that he is first and foremost a top player.

NB James Anderson, the England bowler, did a photo shoot for Attitude last year in which he said he didn’t know any colleagues who were openly gay, but the first one who came out he’d be happy for, and would throw a “special big gay cricket tea” for him. Looking forward to hearing about that particular party.