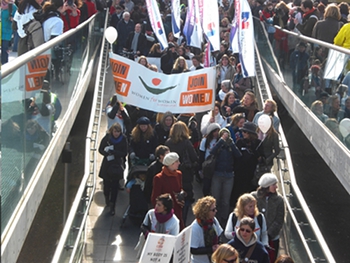 Jesspreet Thethi is a feminist and recent graduate who enjoys reading comics, playing games, wondering around museums and galleries and acting as childish as possible

This follows the amazing success of last year’s campaign, when 20,000 women and men marched in a call for peace. This year is going to be even bigger and better, and want all you wonderful F-Word readers to Join Us on the Bridge!

Women for Women International is dedicated to helping women in areas of conflict. Join Me on the Bridge began in 2010, when women from the war-torn countries of Democratic Republic of Congo and Rwanda came together on a bridge joining the two territories. They displayed their solidarity and desire for peace. Each side carried half a banner and when the women met these were tied together to reveal: “Women are building bridges of peace.”

For one day last year, survivors came together to meet their sisters and stand up for peace and an end of violence against women. They sang, chanted and smiled though out the day. Their strength, spirit and determination for peace is truly inspiring.

This year’s campaign will be bigger and better with Bridge events being planned on five continents and in 43 countries. Find an event near you and spend the day, marching, singing and celebrating womanhood and the prospect of peace.

As the world is about to celebrate the 100th anniversary of International Women’s Day, peace negotiations are happening that will determine the future of Afghanistan. Women are excluded from taking a full part in these negotiations, and we demand that women have an equal seat at the negotiating table and an equal voice in determining their future, and the future of their country.

Let’s help them to build a better future for Afghanistan. We can do this by signing this petition and joining together on bridges on 8 March, International Women’s Day, alongside our sisters in Afghanistan and other war-torn countries across the world.

Over 100 years ago brave women stood up to the inequality they faced and changed the world forever, making it a better place for so many of us. Let’s stand together, follow in the footsteps of our brave sisters and take a stand against the unimaginable brutality inflicted on women in areas of conflict around the world.

Can’t make the date? We at Women for Women International know that for a variety of reasons you may not be able to Join Us on the Bridge. Fear not! You can still show your support and solidarity by writing a message of peace on our Facebook wall, tweeting about us and the Bridge campaign, signing the petition or fundraising in honour of International Women’s Day.