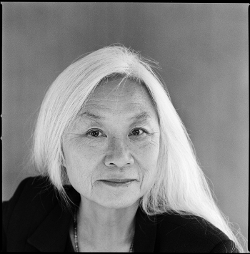 A chance to catch an influential but controversial US writer is coming up at next month’s Bath literary festival.

I’ve not read any of Maxine Hong Kingston’s books myself, but she has a new autobiography out and is talking about it on 6 March:

Maxine Hong Kingston is Senior Lecturer for Creative Writing at the University of California, Berkeley and her award winning books have become key texts in the American canon. I Love a Broad Margin to My Life blends autobiography with events such as being imprisoned with Alice Walker and fictional journeys with avatars and her own poignant journey to the villages of her father and mother in China. An imaginative autobiography from one of America’s most important female writers.

Her book, The Woman Warrior, is August’s reading for the Year of Feminist Classics book challenge as well, if anyone is partaking in that. It has inspired passionate and divergent responses, as well as recognition – Time magazine credited her with “overturning traditional notions of what it meant to be a Chinese woman”.

The author Malinda Lo wrote a brilliant post about her feelings on reading The Woman Warrior as a 16 year old and the role it played in evolving her own sense of identity:

It made me wonder: Was this the way white Americans saw my family? Did they really think that I came from a family that believed in ghosts and treated their daughters like property?

I remember being distinctly disturbed by the book, and when I decided to write this post, I went back and re-read the first chapter. In retrospect, I’m stunned that my teacher gave it to me, because that chapter alone includes sex, rape, misogyny, and suicide.

I was probably 16 years old when I read it, and while I’d like to think that my teacher thought I might be mature enough to handle the content, I wonder if it was simply the only book she knew of that involved a female Chinese American main character. I have to give her points for attempting to find me a book that mirrored my life, but the fact is, The Woman Warrior made me cringe.

It’s not that the book is poorly written. Reading through it again, I find much to enjoy in Kingston’s prose. It’s that the book seemed to have nothing to do with me or my background, and the idea that my teacher thought it did shocked me. I thought: Was this what being Chinese American was supposed to be like?