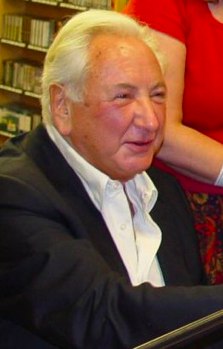 Michael Winner has had a bit of an embarrassing incident on Twitter, according to a column in the Observer today.

Writer and poker player Victoria Coren at first assumed the tweets talking about her breasts couldn’t possibly be from the genuine Twitter account of Michael Winner, but apparently they were:

He sent a direct private message, just to me, saying: “You have enlived my tweeters who discovered your breasts when I knew 0 about them.” He put up four more public posts about my breasts and chatted about them with all who passed by – wheezing happily to one follower: “How naughty of Uto suggest Victoria shows us a piccy-poo of her boobs.” Just feel the dribble of saliva on keys.

Then somebody sent me a link to an official Twitter listing on the Times website. This wasn’t an impostor at all. It actually was Michael Winner.

What a bizarre twist. Actually Michael Winner, hunched over the keyboard, typing incessantly about my bristols? Is he getting dementia? I’ve been playing poker in casinos and dodgy clubs for 15 years, I’m familiar with dirty old men who think it’s hilarious to shout: “Show us your tits!” across a room, but it’s not usually a national treasure doing it in a public place. Michael Winner was shouting: “Show us your tits!” in front of nearly 7,000 people. I didn’t think he should be strung up, just helped quietly to a chair and given a nice cup of tea.

The Michael Winner part of this story is a bit astonishing (there is further confirmation if you read on that it is his account). Perhaps even more depressingly, when Coren made some jokes about his tweets, she received what now seems like the almost inevitable hostile backlash:

But there were others: dozens and dozens from men telling me not to be so hysterical. I’d only tweeted a couple of bemused jokes. Is this fall-out from the sacking of Andy Gray and Richard Keys? It seems there is a large community of men so desperate to shout about women’s breasts, so terrified of not being allowed to, that they complain about strident anger even when it isn’t there.

Photo of Michael Winner by Phil Guest, shared on Wikipedia under a Creative Commons license