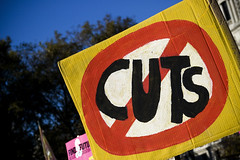 The number of women claiming Jobseekers’ Allowance has risen 12%, meaning the number of women aged 25-49 claiming the unemployment benefit is at its highest since records began in 1997, according to the latest numbers from the Office for National Statistics.

Unemployment is now at 2.49 million. Some are predicting unemployment could rise to 2.8 million.

Anna Bird, acting chief executive of the Fawcett Society, said the figures show that “our worst fears are being realised” over the disproportionate effect of the cuts on women. She said:

Slashing at the public sector workforce inevitably hits women hardest – 65 per cent of public sector workers are women, and they are concentrated in the low paid, low grade and insecure work most under threat.

The figures out today are the tip of the iceberg as cuts are only just beginning to bite. The rising numbers of women facing unemployment are also coping with capped or frozen benefits and the rolling back of many public services that they access more frequently and more intensively than men. By themselves, these changes will blight numerous lives, taken together they add up to a disastrous blow for women’s equality.

Women face a triple jeopardy of cuts to jobs, benefits and services that have over recent years helped to narrow the gender gap. In the run up to the next budget, we urge the Chancellor and Coalition Government to address the disproportionate impact of their economic policy so that hard-fought gains in women’s employment and economic rights are not squandered.

One spark of relief, however: the Coalition has dropped plans to cut housing benefit by 10% for anyone unemployed for more than a year. National Housing Federation chief executive David Orr welcomed the announcement:

It is excellent news that ministers have listened to organisations such as the Federation and dropped the proposal to punish the unemployed by cutting their housing benefit if they have been out of work for more than a year.

We felt the plan would have been unfair and unjust – as it would have punished the unemployed regardless of how few jobs there are in their local area and how hard they have looked for work.

No Government saying that it will look after the vulnerable could possibly have introduced such a harsh measure.

Photo of anti-cuts sign, shared under a Creative Commons license by lewishamdreamer