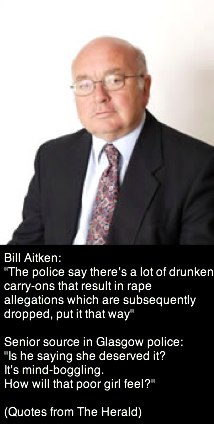 Conservative MSP Bill Aitken has suggested a 38-year-old woman who was raped in Glasgow may have been a “hooker”. The implication being that had the woman been a sex worker/prostitute, that would have made it a lesser offense somehow.

Asked to comment on the series of so-called “lane rapes”, Aitken said: “I really think we need to know a bit more about these. They are not always as they seem to be, put it that way.”

He disputed the location of the attack, and said: “If this woman was dragged halfway through the town then it just couldn’t possibly happen. So has nobody asked her what she was doing in Renfrew Lane?

“Somebody should be asking her what she was doing in Renfrew Lane. Did she go there with somebody? … Now, Renfrew Lane is known as a place where things happen, put it that way.”

Aitken also said a lot of rape allegations are falsely made by drunk women – but had no research to back this up: “The police say there’s a lot of drunken carry-ons that result in rape allegations which are subsequently dropped, put it that way,” he said.

He added: “I think there might be fear, if they are worried that somebody talks …and the word gets back to the boyfriend.”

When challenged on his comments by the Sunday Herald, Aitken denied making them until he read a transcript of the conversation. Asked whether there is a difference between the rape of women who work as prostitutes and those who don’t, he said: “Well, the prostitute has possibly put herself in a position of some vulnerability.”

This is an ignorant and disastrous message for any elected representative to be spouting, but Aitken is the shadow minister for community safety and convenes the Scottish Parliament’s justice committee, which the Herald says helps to formulate rape policy. Aitken has also been a District Court Judge and a Justice of the Peace, and is a Deputy Lord Lieutenant of Glasgow.

To put it mildly, he should have known better.

Detectives in Glasgow were“incredulous”. One senior source said: “Is he saying she deserved it? It’s mind-boggling. How will that poor girl feel?”

Annabel Goldie, leader of Scottish Conservatives, wouldn’t comment on Aitken’s remarks. Incredible: she should be asking for his resignation.