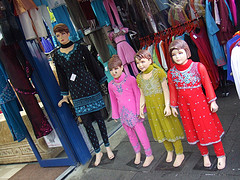 The Southall Black Sisters released a report today stating that suicide rates among British women of Asian origin is twice the national average. Those under 35 are three times more likely to kill themsleves than other ethnic groups. The report cited domestic violence, abuse and arranged marriage as the main causes for high rates of suicide.

Asian Network’s phone in show debated the subject and had some horrific examples of how Asian women can be driven to take their own lives. Some listeners may find the programme upsetting.

If a woman suffers physical or mental abuse from her husband, Asian society says she will bring shame on her family if she speaks of it in public. Divorce is rare and frowned upon and daughters are encouraged to do everything they can to make the marriage work. Some parents will even ignore cries for help from their own children. There are services targeted at Asian women, but those women who move to the UK only after marriage may not even be aware of them or how to access them. In this situation, suicide sadly seems to be the only way out.

Personally I am shocked at the numbers. The only way to bring them down is education of those members of the Asian community who think a woman should just put up with any violence her husband inflicts on her rather than divorce him. But perhaps more importantly, the Asian community should be teaching its men that inflicting violence is wrong.

Photo by mariokoko, shared on Flickr under a Creative Commons license