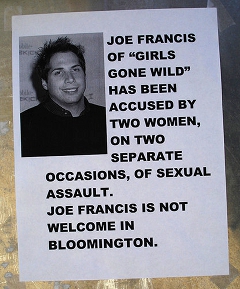 The UK tour will see the Girls Gone Wild tourbus travelling the country looking for British women to feature in new films.

A spokesperson for Girls Gone Wild said the producers were hoping to capture “real, carefree college students and twenty-somethings as they celebrate fun, freedom and youthful expression.”

Some Girls Gone Wild stories from the archives, to help put this in context:

A retrial was ordered at the end of last year, in a case where a woman was suing Girls Gone Wild. She alleges that she “was dancing in at the former Rum Jungle bar in 2004 when someone reached up and pulled her tank top down, exposing her breasts to the “Girls Gone Wild” camera. Jane Doe, who was 20 at the time the tape was made, is now living in Missouri with her husband and two children. She only found out about the video in 2008, when a friend of her husband’s saw the “Girls Gone Wild Sorority Orgy” video and recognized her face.”

At a court hearing, Francis started filming one of the female court employees. Also, he definitely did not compare himself to Rosa Parks or Jesus Christ.

Photo by idiolector, shared on Flickr under a Creative Commons license. It shows a poster used during a successful campaign to cancel a Girls Gone Wild event in Bloomington, Indiana