Men still dominate at national newspapers, a view from the trade press

Stark figures about the dominance of men in the newsrooms of our national newspapers were released yesterday, in a report commissioned by Women in Journalism. 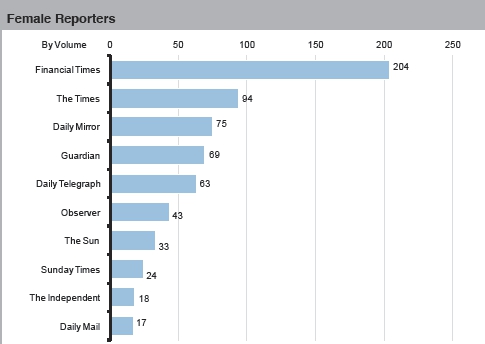 Some of the other headline statistics:

It is interesting that the Daily Mail has recruited the largest proportion of women to its newsroom – but has this aligned its reporting with women’s interests? It’s probably the most frequently criticised of the UK nationals for its treatment of issues such as rape and its frequent stories criticising women’s bodies in lurid terms. Some feminists refer to it as the ‘Daily Male’. Women are still far from a majority in its newsroom at only 36%, yet it is in percentage terms the least ‘Male’ of the nationals.

I work for a trade magazine, covering fairly specialised financial stories – a beat which in the nationals is overwhelmingly covered by men. Our newsroom is at the moment roughly equal men & women (our Americas editor is a woman, and we have one other woman editor, although she is on maternity leave right now). Meanwhile, I know plenty of excellent female reporters working these beats at other publications as well.

When I did my MA in journalism studies at Westminster, my classes were overwhelmingly full of women, with only a couple of men on the course. So, what is happening in between j-school and the nationals, to produce this divergence still? Are women going into PR jobs instead of reporting? Diverging into other careers?