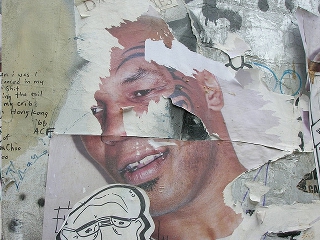 In 1992, US boxer Mike Tyson was convicted of rape and sentenced to 10 years in prison. He served three.

It has been nearly two decades. But is that long enough to justify lionising the boxer in a media profile which labels him “The Legend”, but doesn’t even mention his conviction?

Bidisha spotted such a profile in Sky Sports Magazine.

If anything, media rehabilitation of male celebrities with a history of physical or sexual violence has sped up to the point where it’s impossible to be surprised. Just look at Charlie Sheen, or what is currently happening with Chris Brown although at least he is still being asked questions about this when he goes on TV to promote his new album.

The piece begins, ‘One of the last times you saw Mike Tyson was probably in hit comedy The Hangover …Yet Iron Mike’s enduring appeal means that he crops up in less starry surroundings too’, like his successful speaking tour, The Baddest Man on the Planet. I would contest this title: rape and brutalisation by men is mainstream and, to give Tyson some comfort, I do not think he is the worst perpetrator. He should be reassured that there are many men worldwide who have raped and beaten more women, children and other men than he has.

On tour, writes Bloomfield, Tyson ‘meets his people and answers questions about his extraordinary career.’ She also mentions his recent trip to Mecca, as though he is some kind of peace pilgrim or Deepak Chopra/the Dalai Lama, noting with plangent sentimentality, ‘Such is the life he now leads, a far cry from his destructive final years in boxing when his life spiralled out of control.’

Photo of torn poster of Mike Tyson by Lucus Berrini, shared on Flickr under a Creative Commons license