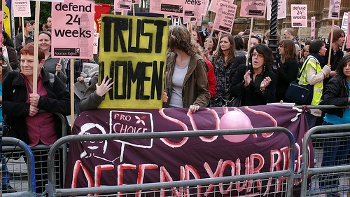 Abortion: buckle up for a fight

Another attempt to wear down abortion rights in the UK is underway.

Nadine Dorries and Frank Field have tabled a series of amendments to the Health and Social Care bill. Yes, the very same NHS ‘reform’ bill set to ditch 20,000 doctors and nurses.

These amendments seek to chip away at abortion access. A leaked power point posted by Unity at Liberal Conspiracy demonstrates what we already knew: this is part of a long-game. The ultimate aim? Making all abortion illegal in this country. The photo I’ve posted (top right) is from one of the many protests back in 2008, when Dorries and Field were once again the leading the attempts to roll back abortion rights. At that time, only 27 Tory MPs voted to support abortion access, and of course the makeup of Parliament has shifted since then.

As Darinka at Touchstone notes, many of these tactics are imported directly from the US, where abortion access and rights have been under much greater attack than in this country.

The content of the amendments is also familiar for those who have followed developments in the US: for example, Dorries and Field want to force women to undergo mandatory ‘counselling’ before being able to have an abortion.

What can we do about this? Abortion Rights is always a good place to start. Do you know of any campaigns, locally or nationally? Please leave details in the comments if you do.