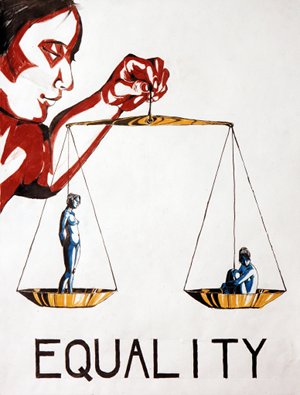 The Cabinet Office is consulting on whether to “scrap” the Equality Act 2010, which bundles together and (theoretically) toughens pre-existing anti-discrimination legislation, including on gender.

Many of the provisions of the act only came into force last week. Meanwhile, staff at the Equality and Human Rights Commission are considering strike action after they learned that cuts to the organisation’s budget could see half its workforce cut.

This is being proposed under the LibCon “red tape challenge” consultation and asks:

Should they be scrapped altogether?

Can they be merged with existing regulations?

Can we simplify them – or reduce the bureaucracy associated with them?

Have you got any ideas to make these regulations better?

Do you think they should be left as they are?

Anyone can respond to the consultation on the site: it’s a good time to tell the government why this piece of legislation is important. Feminist Philosophers suggests these talking points:

– point out that the Equality Act is primary legislation, not a regulation, and that it was supported by all the major parties only weeks before the last General Election;

– point out how improper this process is, when it appears to be asking about mere regulations but is in fact inviting criticism of the entire Act;

– explain why it’s important for discrimination to be unlawful;

– give examples of the difference made in people’s lives by the existence of equality law.

Drawing of scales of justice by saxarocks, shared on Flickr under a Creative Commons license