How green is your tiara? Get Miss Earth finals out of the London Green Fair 2011!

Clare Cochrane is a founder of Oxfordshire Reclaim the Night, and a Green Party member, and lives in an ecological housing co-op in Oxford

There is no copyright on ‘green values’. Just like the question, ‘what is feminism?’, exactly what it means to be green is a topic of much debate. But there are some things that clearly aren’t green. And sexism is one of them.

So imagine my horror when I discovered that this year the London Green Fair will be hosting the UK finals of Miss Earth.

Yes, an annual event designed to promote green values and ethical lifestyles is teaming up with a beauty pageant organiser to promote the sexual objectification of women, and a narrow and oppressive definition of ‘beauty’.

I’m a feminist, a green campaigner, a member of the Green Party and fairly well-read; I’ve read stuff by ecologists including Murray Bookchin, Vandana Shiva, Susan Griffin, Derek Jensen, and others. And as far as I can tell, beauty pageants just don’t fit in to the ecological world view. Green values are about the equality of diverse beings, and celebrating the diversity and difference in living beings that contribute to the web of life.

Beauty pageants, on the other hand, are about valuing women more for their beauty than their as a whole human being; measuring the value of a woman by how much her appearance meets the approval of others, particularly men; and presenting a single, narrow concept of ‘beauty’.

Well so much you already know. What I’m saying is that beauty pageants are sexist – and sexism isn’t green.

But it’s also not in line with the London Green Fair’s ethical policy (scroll down to read it), which says, amongst other pledges: “We will not deal with those who exploit the individual.”

I’ve asked the London Green Fair to explain to me how the sexism of a beauty pageant is in line with promoting green values, but they haven’t replied. Probably because they can’t – because it isn’t.

So help me persuade the sponsors of the London Green Fair to take action – and withdraw their support until the London Green Fair drops the Miss Earth UK finals. Sponsors include the Co-op Membership and Camden Council. I’m pretty sure that sexist beauty pageants are not congruent with co-operative values. And I’d be interested to know what those more familiar with the Gender Equality Duty might have to say about Camden Council sponsoring a fair that includes a sexist beauty pageant. 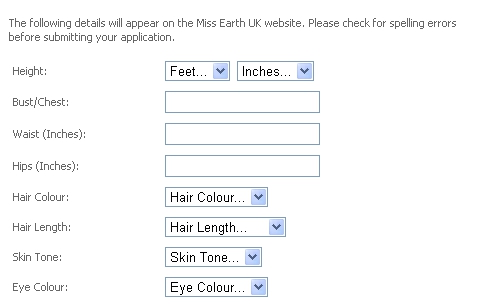 Screengrab of the 2011 entry form for Miss Earth

I’ve written to both the Co-op and Camden Council to ask them to withdraw their support for London Green Fair unless it withdraws from hosting Miss Earth UK finals, but I haven’t heard back yet. What they need to know is that lots of us feel the same way. So if you’re a supporter of green values, a Londoner, a Camden resident, a co-operative supporter, or just a feminist, join me in campaigning to get the London Green Fair to withdraw from hosting the finals of Miss Earth UK. Let’s make it understood that sexism is not green.