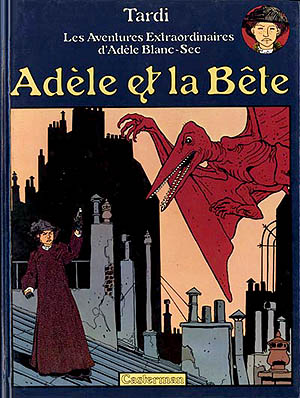 The extraordinary adventures of Adèle Blanc-Sec

Adèle Blanc-Sec has been the star of her own comic book series since the early 1970s and Luc Besson’s adaptation of one of her stories is in UK cinemas now. The year is 1912, her character is a historical fiction writer turned steampunk adventurer, on a quest to revive Ramasses II’s chief physician from his mummified state. Meanwhile, a pterodactyl strikes terror/gets into amusing pranks over Paris.

The action is cartoonish, and a bit ludicrous at times, but this is a lot of fun. Meanwhile, Blanc-Sec is unphasable, brave, funny hero.

A study of Hollywood movies in 2008 concluded women are underrepresented behind the camera and in front of the camera. Men had 67% of the speaking roles in US cinema in 2008, while women had 33%, for example.

So it’s good to see a film which has an interesting female lead. It’s not perfect by any means, and it largely glides over the problems of romanticising the past which seem to cling to much of steampunk and representations of people of colour are limited.

The comic series started in the 1970s, and only a few have been translated into English – those are reportedly out of print. According to Wikipedia, Fantagraphic Books have bought the rights to the English translations of the whole series, but have yet to publish them, because they don’t consider it as saleable in the US.

Her adventures start in pre-World War I France, and then continue after the war. In the comics, she was cryogenically frozen during the war, because illustrator Jacques Tardi thought: “Her feisty nature made it impossible to provide her with a place in the war. She would not have been allowed to fight, and could no more have settled for being a nurse, than she could have remained home rolling bandages.”