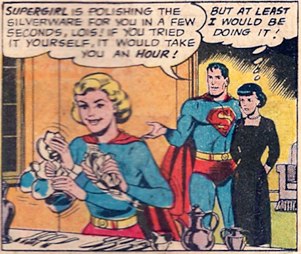 In 1941, the executives who ran comics juggernaut DC forced the artists behind Superman to change the look of Lois Lane, with the aim of turning her into more of a “tasty dish”.

Comic Book Resources has posted excerpts of a letter from Whitney Ellsworth to Superman co-creator Jerry Siegel, telling him that “better artists in this field draw their heroines more or less by a certain formula that makes them look desirable and cute”.

The full letter is worth reading, and CBR has posted ‘before’ and ‘after’ images, showing how Lois Lane’s look changed following this intervention from DC. It’s revealing about attitudes to women’s bodies at the time: women were meant to be pretty and desirable, but not too desirable or sexual. Ellsworth berates the artists for both drawing Lois Lane as unpretty, but also too “unpleasantly” sexy (really!!). But also, how does this relate to the evolution of women in superhero comics?

She looks pregnant. Murray [presumably Murray Boltinoff, longtime DC staffer – BC] suggests that you arrange for her to have an abortion or the baby and get it over with so that her figure can return to something a little more like the tasty dish she is supposed to be. She is much too stocky and much, MUCH too unpleasantly sexy.

He goes on to complain about the artists showing Lane as having hips, breasts and a stomach, and makes detailed suggestions on how she should look. 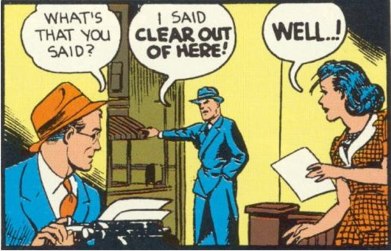 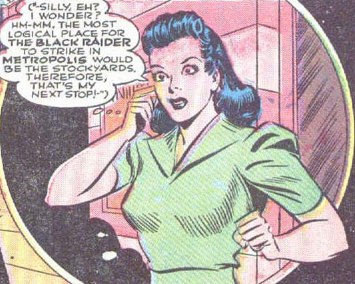 I’m no expert on the Superman comics – to me, Terri Hatcher’s 1990s version embodies Lois Lane. But if this window into Lois’ history is representative, by the late 1960s and early 1970s (see panel top right), Lois was characterised as “a posessive, jealous, needy, self-centered harpie who repeatedly attempts to persuade, bully or trick Superman into marrying her”. In a slightly earlier comic found by io9, “Lois Lane has transformed herself into a massive Kryptonian insect who can withstand Superman’s Übermenschy libido.”

K Beaton of Hark! A Vagrant has hir own take on this, reimagining Superman as Lois’ stalker… (H/T: @sphericalfruit)

Where now for Lois? One artist has tried to pitch a comic starring Lois Lane aged 11, aimed at young girls. But DC passed on the idea.

Another adaptation of Superman for the big screen is in the works right now, with Amy Adams cast as Lois. Already people are complaining that 36-year-old Adams is “too old” for the role. Sigh.