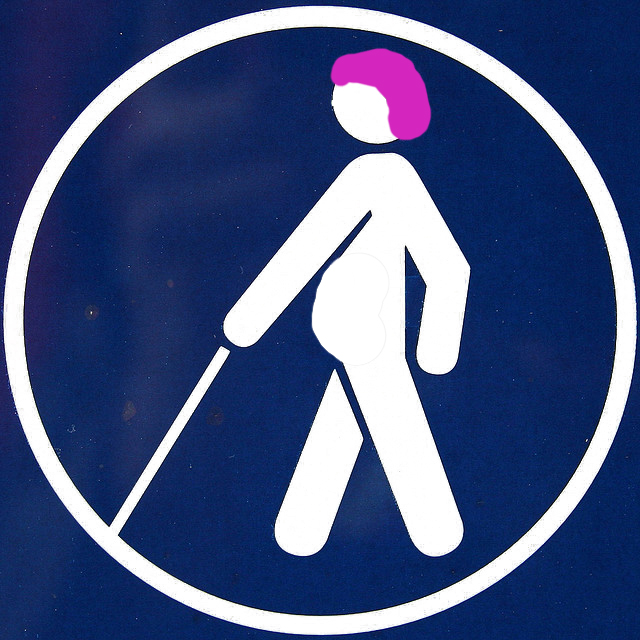 [The image is a disability access symbol for people with visual impairments. It has a dark blue background and a grey circle, in which there is a stick figure using what appears to be a cane. The image has been edited to add a fatter tummy and pink hair.]

I was alerted on twitter to a blog post about a recent study which reports that one in six women say they would rather be blind than obese. By sheer coincidence, I had just been reading Whose Tragedy? Towards a personal non-tragedy view of disability, by Sally French and John Swain (pdf), and this sentence stood out:

They go on to explain that the Tragedy model of disability and impairment “is not just significant for non-disabled people in understanding themselves and their own lives. It is extrapolated to assumptions about disabled people and their lives”.

Non-disabled society’s view of disability as something awful which happens to people is very disempowering, and negates the reality that what disables us is an inaccessible society, not the impairment(s) we may have. So, with that in mind, I found the horror with which the revelation that ‘some women would rather be blind than fat’ was met, to be very telling. Reading between the lines, I hear, Who on earth would rather be blind? Who would choose such a dreadful affliction over fatness?

How would that read to a blind woman? Oh em gee, some people would rather be like YOU than be fat! And how would it read to a fat, blind woman?! How much can we disempower disabled people in one go?

I agree that this survey suggests some very distressing things about women’s attitudes to fatness and weight gain. It is depressing that being fat is so feared and so loathed. But saying that the most noteworthy of the things that women ‘would rather be’ was blind, and then using that as an example of just how incalculably far our body fascist society will make us go to avoid fatness, speaks volumes about our attitudes towards disability too.

Maybe if we stopped fat-shaming and equating women’s attractiveness and worth to unreasonable, media-driven standards of beauty, women wouldn’t value their appearance over health..

But blindness in itself is not ill-health! There are very, very many completely healthy blind people, both thin and fat. While I agree with her absolutely about fat-shaming and unreasonable standards of beauty, the rest of the equation does not sit comfortably me, speaking as a fat, disabled woman. It makes me feel like women believe I must have the absolute worst of both worlds, and the last thing I want, when reading feminist websites, is to come away feeling worse about myself than when I started.

(With thanks to Leo Reynolds for the image which I used to create the picture above).