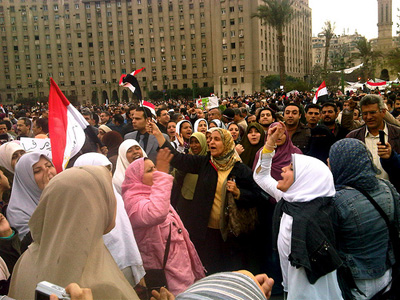 Via CNN International and others, it seems that the allegations of enforced “virginity checks” made by Amnesty International (link here after the pro-democracy protests in March this year – and denied by military authorities – have now been confirmed and defended by “a senior general who asked not to be identified“. Women protesters told Amnesty International that they were beaten, given electric shocks, subjected to strip searches while being photographed by male soldiers, then forced to submit to ‘virginity checks’ and threatened with prostitution charges.

“The girls who were detained were not like your daughter or mine,” the general said. “These were girls who had camped out in tents with male protesters in Tahrir Square, and we found in the tents Molotov cocktails and (drugs).”

The general said the virginity checks were done so that the women wouldn’t later claim they had been raped by Egyptian authorities.

“We didn’t want them to say we had sexually assaulted or raped them, so we wanted to prove that they weren’t virgins in the first place,” the general said. “None of them were (virgins).” [Source: CNN International]

As Amnesty International said in its report:

‘Virginity tests’ are a form of torture when they are forced or coerced.

Women and girls must be able to express their views on the future of Egypt and protest against the government without being detained, tortured, or subjected to profoundly degrading and discriminatory treatment.

The army officers tried to further humiliate the women by allowing men to watch and photograph what was happening, with the implicit threat that the women could be at further risk of harm if the photographs were made public. [Source: Amnesty International]

However, “virginity checks” are not the sole preserve of the Egyptian authorities – Huffington Post recently reported that the British government “administered so-called “virginity tests” to female immigrants hoping to enter the country in the 1970s on marriage visas“, and the Afghanistan Independent Human Rights Commission (AIHRC) has also called attention to it in Kabul and elsewhere [source: Alaiwah], to mention just two examples.

What is a matter of concern – apart, obviously, for the well-being of the women concerned – is that in Egypt, a country currently going through a democratisation process in which women already seem to be sidelined, the authorities seem more concerned with maintaining an outmoded and repressive patriarchal power base than genuinely seeking to enable the empowerment and equality of women.

To my mind these are flagrant human rights abuses and I can only agree with Amnesty International’s statement that:

Forcing women to have ‘virginity tests’ is utterly unacceptable. Its purpose is to degrade women because they are women. All members of the medical profession must refuse to take part in such so-called ‘tests’.

Image via Al Jazeera English’s ‘Women of the revolution’ photostream on Flickr, used under the Creative Commons Attribution-NoDerivs 2.0 Generic licence.