No matter how much it protests otherwise, fashion is a many-gendered thing.

Of course, when I say ‘many’, what I actually mean is ‘two’.

As pointed out by Lisa Wade at Sociological Images, there is rarely an option these days to buy clothes that are categorised as anything other than men’s or women’s.

Many modern garments are in actual fact unisex, but retailers still make us enter specific shops, floors or sections of their website in order to purchase according to our gender. Why are t-shirts and the vast majority of leisurewear sold for male or female customers when most of us would probably find it easier to simply purchase based on style, colour and size? Why are women sold fashion suits but not formal ones? Why is it only Vince Noir who eschews Topman for the rather more varied choices available in the supposedly girly Topshop?

While fashion has always been pretty specific about which gender wears what, these ‘rules’ weren’t always the same as they are now. If you venture into a 21st century clothing store, you’ll see that only women should wear frills and bright colours, but the reverse used to be true even as recently as the 1960s! Corsets are usually seen as a female garment, having been frequently worn in the past to give a woman’s body a more fashionable shape, but we forget that they also provided hope to many chubby men who longed for a more athletic figure. Prior to the 19th century, it was not unusual to see wealthy, fashionable men wearing stockings and heels which are now almost always marketed as for women and girls, plus it is only since the 1940s that pink has been considered a ‘girly’ hue, with babies wearing dresses of no specific colour up until that point, regardless of their gender.

Womenswear and menswear have sometimes differed wildly from each other, but at other times have borne more than a striking resemblance

His and Hers, an exhibition currently running at New York’s Museum at the Fashion Institute of Technology, explores the ever-changing ideas of masculine and feminine clothing from the 18th century to the present day.

Throughout the periods represented, womenswear and menswear have sometimes differed wildly from each other, but at other times have borne more than a striking resemblance. Cultural changes can go some way to explain such changes in fashion trends – for example, the periods during and after the Second World War – the curators told cultural media website ARTINFO: “Designers are not creating their clothing in a vacuum – however fashion cannot be viewed as a mirror of what’s happening in society, it’s more complex than that.”

Is the fashion industry’s divide, or lack thereof, between masculine and feminine clothing something it creates itself, or is it simply a reflection of changing attitudes within western society?

These days, it is not always just the designers and manufacturers who rely heavily on gender assumptions. Lazy advertising agencies often resort to using gender stereotypes to promote their clients’ clothing which, in turn, only serves to strengthen traditional ideas of what men and women should wear or do. Hopefully we are now seeing the tail end of campaigns such as Suit Supply’s aptly-named Shameless, which shows us exactly how that brand thinks a manly-man should act while wearing his manly suit, or French Connection’s For Man and For Woman with its tired old usage of active/passive gender roles. However, this is itself a trend and is perhaps simply a reaction to high fashion’s current preference for androgyny – a style that some more down-to-earth brands may feel their customers cannot relate to. 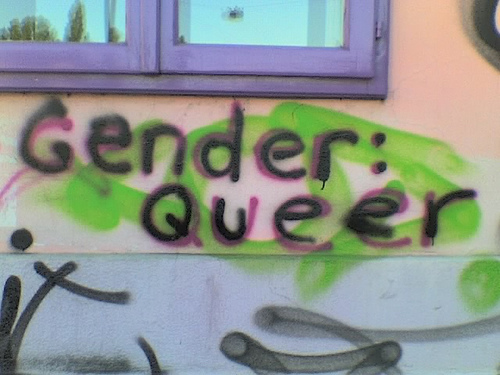 In a partially-related trend to that for androgynous models in advertising, some magazines have taken rather a liking for displaying cross-dressing on their fashion pages.

Sadly, reporting of the blurring of gender boundaries as a trend for 2010 just proved that the fashion media doesn’t seem to understand more complex gender issues at all, preferring to stick girly-boys, cross dressers and transsexual people all under the same heading. Fashion journalist Cator Sparks told the Daily Telegraph recently, be warned the following quote contains a transphobic slur, “The only thing I am irritated about with the current trannies, is that they are not camp enough. If you are going to be a gender bending femme fatale, come on give me some fake eyelashes and red glitter lips!” Hopefully he wasn’t confusing drag queens with trans women but, whatever his intentions, such wording can only serve to further confuse your average broadsheet reader.

Over on TBD.com, Amanda Hess discussed the New York Times’ recent obsession with, and misunderstanding of, trans people stating: “The physical appearance of trans people is a key indicator of their worth to the mainstream.” While Hess refers to trans people, fashion is usually only concerned with trans women who, although often utterly misunderstood to the point of offence, are at least not ignored completely like trans men.

Not everyone enjoys having to fit into the gender roles society assigns us based on the clothing we wear, but it can be surprisingly tricky to find something to fit your body that doesn’t fall into these traditional categories

Due in part to the progress made by the rational dress movement and then second-wave feminism – often referred to in the fashion press as women’s lib – there is now very little clothing that is seen as solely male in today’s western society.

Masculine things are almost universally considered to be good. I don’t think Dorothy Surrenders would have found nearly as many images to use if her Gender Fuck Thursday posts featured attractive male celebrities in women’s clothing! Most casual menswear can be completely unisex when viewed without a body inside it, yet most womenswear is framed as nothing but feminine. The only way a man can still appear macho – should he want to – by wearing such garments is to exhibit extremely masculine physical attributes or mannerisms and, perhaps due to the British tradition of viewing a man in woman’s clothing as a comedy figure, few men even attempt it. However, check out the inspirational Kasmeneo’s Flickr photostream for the fashion joy that can be had when a man doesn’t limit himself to the menswear department.

Still, much to the relief of those who don’t fall into this terribly binary system that the majority of the fashion world subscribes to, the availability of gender-neutral clothing is increasing. Despite the fact that garments in their online store are still divided into gendered categories, American Apparel have a surprisingly unisex product range and smaller brands such as The Butch Clothing Company are successfully producing clothing traditionally associated with one gender yet tailoring it for another. Not everyone enjoys having to fit into the gender roles society assigns us based on the clothing we wear, but it can be surprisingly tricky to find something to fit your body that doesn’t fall into these traditional categories. If you’re a stick thin androgynous model, there are many clothing options available that don’t scream ‘man’ or ‘woman’. However, if you’re just not that body type, a seemingly endless trawl around alternative clothing labels online and off the beaten track seems like the only way to build the wardrobe of your dreams.

If this is you, rest assured you are not alone. Many people don’t like what mainstream clothing inadvertently says to other people about them and feel that they have trouble finding garments that are designed with them in mind. There must be plenty of independent retailers offering such clothing but, as was the case with retro-styled clothing a few years back, a one-stop-shop can be hard to find. Genderplayful is a planned online clothing marketplace that aims to bring all this together in one place, claiming to be “for anyone who can’t easily find what they’re looking for in a typical clothing store, with special support for androgynous, unisex, butch, dapper, femme, gender-bending, gender-transgressive, and gender-fanflippingtastic clothing solutions for all kinds of bodies”. We can hope that more mainstream fashion brands choose to latch onto this growing market too, but the chances are that it will simply be another trend if they do.

Picture of a Unisex sign with the male and female figures overlapping, taken by Flickr user bartmaguire. Picture of graffiti reading ‘Gender: Queer’ taken by Flickr user celesteh. Extract from a Buster Brown comic with Buster and Florence trying on each other’s clothes; comic strip obtained from Wikimedia Commons, where the full comic can be viewed.

Lorraine Smith is a blogger who once ditched fashion for feminism, before realising that those two f-words are not mutually exclusive