The revolution is in you

In the flourishing, highly bankable genre of historical fiction, women are a big deal: they write books, they read books and they are often the most prominent characters within those books.

Historical novels run the gamut from slippery bodice-rippers to the postmodern ‘neo-historical fiction’ which has taken off over the past couple of decades, which usually replaces conventional romance with a more critical engagement with fictional and factual texts surviving from the author’s period of choice.

Lucile was no knitter by the guillotine, but a middle-class girl who was on the spot and friendly with all the big names

Any period will do for a bit of spicing-up. Ancient Rome, Tudor England, or Sarah Waters’ seedy, sexy Victorian London: all have been shaped in our imaginations by best-selling works of fiction. Compelling as revolutionary France is from a feminist perspective, however, it has received less attention, in part because its political complexities are daunting, with new factions rising and falling day by day. But Marge Piercy, introducing her novel, City of Darkness, City of Light

, set during the period, identifies it as an era that calls for feminist analysis, and in particular for comparisons with the present day:

We have had no shortage of revolutions in our time that did not fulfil their promises. Women have fought again and again in causes, that, when won, have not given us the freedom, the benefits we expected. 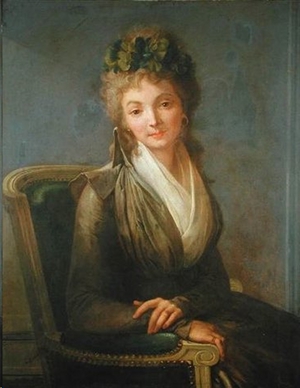 Lucile Duplessis (right) appears in more than one book about the era. Born in 1770, at 20 she married Camille Desmoulins – a famous journalist and the man who had kindled the Revolution in the baking July days of 1789. She was no knitter by the guillotine, no Charlotte Corday (the provincial royalist who stabbed Dr Marat, hero of the sans-culottes, to death in his own bath), but a middle-class girl who was on the spot and friendly with all the big names.

She and Camille had a child in 1792, a little boy called Horace. They chose as godfather an old friend of Camille’s from his schooldays, Maximilien Robespierre. But as Robespierre’s Terror intensified in 1793, the faction to which Camille belonged – led by the revolutionary hero and political moderate, Danton – became concerned about such widespread bloodshed. Camille’s writings began to call for mercy, an appeal which proved more dangerous than all his earlier radicalism. Even friendship with Robespierre, the ‘Incorruptible’, was no longer enough to keep him safe: he and Danton were arrested, given a quick show trial and executed. Lucile was accused of conspiring to free them; eight days after her husband, she too went to the guillotine, aged only 24.

In books Lucile Duplessis has had short shrift. Plenty of authors – male and female – have acknowledged the pathos of her situation; very few have allowed her any agency, or been willing to consider her as anything but an adjunct to her husband Camille. Male writers have turned her into a conventionally tragic heroine, in both historical and fictional accounts. The French historian, Jules Michelet, included her story in Les Femmes de la Révolution (1854), relating how she wandered, mad with sorrow, outside her husband’s prison, a story which was also reproduced in fictional accounts of her fate.

Last year, the National Theatre revived Georg Büchner’s 1835 play, Danton’s Death, in which she speaks the fractured, song-punctuated language of an Ophelia figure, lingering obsessively over the word “die”. Although the real Lucile wrote energetically to possible allies in an attempt to avert her husband’s execution, Büchner’s version of her is unhinged by the sight of his prison, taking it for an “iron mask” which blocks his face – she ultimately commits suicide by the simple-yet-dramatic method of shouting “Long live the King!” in public.

Marge Piercy’s avowedly feminist novel offers readers a sustained attack on Lucile, often directly contradicting the details which have come down to us from those repressive days in the 1790s

Doesn’t sound like much of a feminist role model or an obvious figure to catch the interest of politically-aware women today? The problem is that she’s not allowed to be. These accounts belie her. They show how easy it is to re-write what a woman actually did into a more romantic, more acceptable version. An occasional writer has allowed Lucile her role – as when, in Stanisława Przybyszewska’s The Danton Case (1929), Danton insists that she must manage the propaganda for himself and his imprisoned friends, since she has the power to “set all of Paris going” – but more usually, she’s portrayed as the woman who couldn’t live without Camille Desmoulins. It’s as though her lack of a tidy label, which would assign her to one of the familiar categories of revolutionary women – the tricoteuses, the dazzling royalist martyrs – means that we’re not really expected to look at her at all.

Most startling is the fact that Marge Piercy’s avowedly feminist novel from 1996, City of Darkness, City of Light, offers readers a sustained attack on her, often directly contradicting the details which have come down to us from those repressive days in the 1790s. Although this novel presents itself as an exercise in herstory, exploring with animation and verve the revolutionary adventures of less well-documented figures (such as Claire Lacombe and Pauline Léon, both leading militants among the revolutionary women of Paris who melted into near-obscurity later in the decade), Lucile is a hyper-feminine caricature of incompetent, stereotyped girlishness.

In the novel’s final chapter, set in 1812, the surviving women look back on “that boy who never grew up – Desmoulins with his pretty, silly wife”. Danton muses that she’ll be no help to his own heavily pregnant wife, judging her “the overeducated pretentious daughter of a literary mama”. Most damningly of all, she’s unable to pack quickly enough when her coterie is forced to flee Paris for the countryside, and is later consumed by hysteria when her husband is arrested.

It is possible even for ‘ordinary’ women to hold political opinions, given the chance

For Piercy, the desirable face of revolutionary feminism is its militant aspect. The women who occupy the Palace of Versailles are “raunchy and loud”, not “ladylike or meek”, they admire leaders like Anne Théroigne de Méricourt, who wears men’s clothes and knows how to use weapons. These women are suspicious of the male revolutionary leaders – they sometimes give their allegiance, but they’re also ready to withdraw it. They are open-minded about sex, criticising the imprisonment of prostitutes and showing an anachronistic willingness to accept lesbian relationships, despite the fact that lesbianism was a favourite slur applied by her detractors to the disfavoured Marie Antoinette.

Are they a little too good to be true? Paris held every variety of woman, and every flavour of ideology – but one reads City of Darkness, City of Light with a lurking feeling that Piercy has projected onto these relatively blank slates the views which she considers most acceptable to mainstream contemporary feminism. This is not the best way to write women back into history. The Paris women who adopted militant tactics during the Revolution – fascinating as they are – represent only one strand of the story. Confining our literary interest and retrospective approval largely to the women whose endeavours match up best with our tactics (such as a preference for direct action) or ideologies does a disservice to women’s history, by definition a narrative in which many participants experienced world changing events through a filter of domesticity.

What the best neo-historical fiction can provide, from a feminist perspective, is a complex, subtle, recuperative herstory, a synthesis of the most ordinary and the most world-shaking aspects of life. Such complexity is amply demonstrated by surviving texts: the last letter which Camille sent to Lucile mingles impassioned declarations of love and despair with minute details about a pair of eye-glasses he would like her to buy for him. They must be steel-framed, not silver; if she asks the vendor for “number 15”, he will know what to give her. A letter from Lucile to Fréron, an old friend, documents the panic and instability of the weeks preceding their arrests – after asking him to assemble their old supporters, she elaborates her dolefulness with the observation that she never plays the piano any more, or pretends to be a cat. 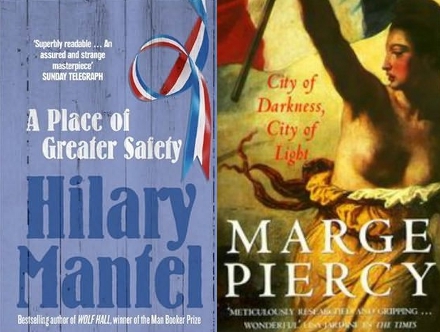 Only one novelist successfully tackles the vast job of writing Lucile convincingly, without distorting her into a figure either improbably silly, or improbably tragic. This is Hilary Mantel, in A Place of Greater Safety, the historical novel which preceded Wolf Hall by 17 years, but which is deserving of at least equal interest from feminist readers. Mantel’s Lucile is one of the most clear-sighted characters in the novel, not least because she actually has time to think about what’s happening, unlike most of the men. We often find her curled up with a novel or her diaries (she keeps two sets, Mantel imagines: “One’s for pure and elevated thoughts, and the other’s for what really goes on”), and Mantel doesn’t attribute to her any inflated abilities within the sphere of practical politics. She’s usually at home, sometimes out partying. But Robespierre remarks to himself that “her opinions [are] worth having” and the book itself bears this out. Her husband is one of the public theorisers of the Revolution; in private, she matches that role. To the distraught Anne Théroigne, for example, she observes:

Once you start to live in the public eye people attribute actions and words to you, and you have to live with that. If they say you rode astride a cannon, then I’m afraid you did.

This theory is one of the novel’s governing ideas, so it’s telling that Mantel allows Lucile to vocalise it. Her romanticism is allied to a strong practicality; even as a teenage girl, living under the weight of her parents displeasure, it is she, not Camille, who arranges for them to exchange letters under the cover of church-going. “Piety to some purpose,” she calls it. She quickly acquires the vocabulary and mental furniture of a radical – her father is scandalised to hear her talk of battlefields, reinforcements, powder and shot, but Mantel has remembered that it is possible even for ‘ordinary’ women to hold political opinions, given the chance. Once they’re married, she is “full of fight”, maintaining a strong inward sense of self throughout the shocks and upheavals of the early 1790s. If somebody says that her husband has made her sarcastic, she’ll explain that she was always sarcastic; far from perceiving herself as Camille’s adjunct – the dominant interpretation of her in male-authored historical narratives – she wonders if he is unreal, a “second self” that she’s dreamt up.

Michelet said back in 1854 that Lucile was not a political woman, but “simply a woman”. He meant that she took no grand action, made no sweeping claim to a place in the political history of the era. It’s the job of historical fiction to reveal, as nothing else can, that even simply-a-woman exists as a web of complex loyalties – personal, national, political, religious or irreligious. It’s easy to demote simply-a-woman in favour of her more obviously feminist comrade. But these in-between women, these women on the fringes, often let us look more closely than anyone else at the strategies and priorities of fiction-writing. “The Revolution is in you,” Michelet apostrophises Lucile, underlining her tragedy. But there’s another meaning there: revolutions are for everywoman; history is for everywoman, because every day of it is full to the brim with women living out their lives.

Chloe Stopa-Hunt is a poet, critic, and translator. Her poems have appeared in a number of periodicals, including Oxford Poetry and Magma, and she has written on poetry, literature, and translation for Bluestocking, Asymptote and The Oxonian Review. She is guest editor of YM: New Work in Poetry