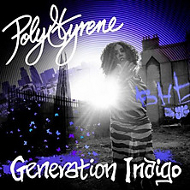 It is painfully hard to set aside the fact that Poly Styrene died not long after the release of Generation Indigo on Future Noise. This last album not only should have signalled the triumphant return of one of punk’s most singular talents. It is fresh, uplifting, sharp and musically innovative in its approach.

Prior to forming X Ray Spex in 1977, Poly had a brief go at being a pop star when she released the single ‘Silly Billy’ under her real name Marion Elliot. She first saw the Sex Pistols on her 19th birthday, then went on to place an ad for “Young punx who want to stick it together” in Melody Maker. She effectively stopped singing for the duration, becoming an ‘anti-singer’ instead.

With Generation Indigo, Styrene returns to singing but the album has no less bite for that choice. For those looking for comparisons to X Ray Spex’s 1978 album Germ Free Adolescents, the only obvious link would seem to be Poly’s continued fascination with consumerism, but even that is different. On tracks like ‘Art-I-Ficial’ and ‘Germ Free Adolescents’ Styrene at times seemed to be drowning in consumerism, submitting to it despite herself, but on this album she is fighting against its effects, whether that be the deadening meaningless of online romance in ‘Virtual Boyfriend’, a tirade against exploitation and child labour in ‘No Rockefeller’ or seeing beyond the initial attraction of someone’s, admittedly ethical, trainers in ‘I Luv Ur Sneakers’. All of the songs are about two to three minutes long and they don’t overstay their welcome, meaning the whole album zips along very nicely.

Musically, this record frequently has an electro punk energy more in common with The Gossip, Le Tigre or Noisettes than any thrash punk record. It contains some very socially biting lyrics and the tone is often bloody angry, verging on furious, but the overall theme is optimistic rather than nihilistic. For example, on ‘White Gold’ (referring to the melting of the arctic ice), there is a particularly joyous moment, despite the song’s subject matter. Here, Poly insists she doesn’t think the world is ‘doomed’, despite climate change, and the song surges along like ‘Vacation’ era Go-Go’s, causing me to reflect that this is probably the first and last time I’ve been inspired to dance around the living room or bedroom to a song about climate change.

You can call me a brat or the girl is too fat, but I would say I’ve got my little yoga mat

The angrier and more explicit ‘Code Pink Dub’ or the transcendent and very lovely ‘Electric Blue Monsoon’ are both catchier (the former with an anti-war sing-along-chorus to rival ‘Give Peace A Chance’ and the latter in its beautiful simplicity), ‘White Gold’ would nonetheless make a very good pop single. ‘Kitsch’ would also make a very good single and it’s interesting that this most energetically pop of tracks is the one that sees Poly take on every bad personal comment made about her, often by the music press, over the previous 30 or more years. The result is both scathing and funny. “You can call me a brat or the girl is too fat, but I would say I’ve got my little yoga mat,” she sings at one point, having ingeniously rhymed ‘kitsch’ ‘witch’ and ‘bitch’ in previous verses. “I am carefree, you can’t put me down, I am carefree you can’t put me out,” she maintains throughout, somewhat poignantly. Needless to say, if this track doesn’t make the set list for every Ladyfest disco for the next five years then there’s no justice in the world. Similarly, ‘Thrash City’ swaggers along like ‘Suffragette City’ meets ’52 Girls’, making for a dance floor filler that is both knowing and subversive while also probably being the most rock’n’roll moment on the album. 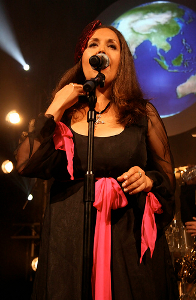 Not every track on the album entirely works (‘Colour Blind’, specifically, despite it’s positive take on race relations, has the misfortune to sound uncannily like a bad Chaka Demus and Pliers record). But in the main it strikes a high standard in terms of musicality, lyrical strength, attitude and ingenuity. From the garage rock rawness of ‘L.U.V’, which basically comes across like Iggy and the Stooges trapped in a disco with a stray saxophone player (a combination that is oddly effective) to the Blondie-like pure pop of ‘Ghoulish’, which is all knowingness and razorblade edges underneath the sheen, to the rock’n’roll spirit of ‘Thrash City’, the album exudes confidence and vitality from every note.

The aforementioned ‘Code Pink Dub’ strikes a more discordant tone and is probably the most politically explicit track of the album. A scathing, skanking take on the hypocrisy of business and war that seems to share a certain lyrical sympathy with MIA’s notorious ‘Paper Planes’, ‘Code Pink Dub’, with its constant refrain of “We’ve gotta get the hell out of Iraq”, is effective and catchy without being preachy. Whereas ‘Colour Blind’s stab at reggae and dancehall misfires, ‘No Rockefeller’ blends dancehall with aspects of calypso in its praise for Winnie Mandela and condemnation of child labour and capitalist exploitation. However, it’s the concluding track, ‘Electric Blue Monsoon’ that proves to be the most startling. This opens as an echoing acapella and the sparse backing fades in slowly, enhancing the simple almost-doo-wop rhythm of the tune. It’s a simple song but very effective, very moving and very up in mood.

It is a fitting testament to Styrene as an artist that this record should and could be one of the key pop records of 2011.

Second photo by Daveknapik, shared under a Creative Commons Licence.

Cazz Blase’s three favourite bands of all time are Siouxsie and the Banshees, The Go-Go’s and Kenickie, and she is well aware that these choices rarely gain her any favours