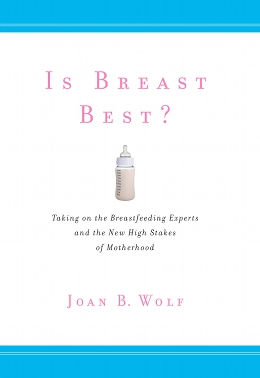 Of all the topics discussed by mothers online and off, one of the most controversial is the issue of breastfeeding. Debates and discussions rage over breast vs. bottle, with terms such as ‘Boob Nazi’ thrown around, and accusations of the dangers of formula feeding voiced in extremely passionate and emotional terms. But few people on either side of the debate seem to challenge the idea that breastfeeding is best, even confident formula feeders.

When I recently wrote about my experiences breastfeeding and the terrible guilt that can ensue when switching to formula, I too conceded that breastfeeding was the ultimate. This agreement was due to me accepting what I had been told by numerous reports and government programmes about the benefits of breast milk and breastfeeding. In Is Breast Best?, Joan B. Wolf challenges both the science behind the assertions and the value of breastfeeding campaigns, in the context of what she considers to be “neoliberal risk culture”. She does this not to defend formula feeding, but to examine the reasons behind, and effects of, the marked superiority that exists in pro-breastfeeding campaigns.

To accept Wolf’s conclusions about breastfeeding, you first have to engage with her idea of a risk culture. I find it hard to disagree with much of what she has to say on the topic, which essentially agrees with the Bad Science view of media reporting (and therefore public understanding) of scientific research. Reportage is rife with misunderstandings about statistical significance versus social significance and lacks any sort of contextual thinking. The risks of doing something are rarely balanced against the risks and trade-offs of not doing it, and vice versa. Think of all the things a certain publication says give you cancer; it’s media scaremongering at its best and the kind of environment that breeds an enormous pressure to be individually responsible for every single moment of ill-health you or your children might suffer.

One example Wolf gives is of a relatively reliable study, that shows that children breastfed for longer are 40% less likely to suffer at least one gastrointestinal upset (diarrhoea, basically) in the first year of life. Which sounds impressive, but that’s actually about 4% – or one in 25 – absolute risk (13.2% of one group vs. 9.1% of the other). Is that really what we’d consider a significant risk, socially speaking?

So assuming you accept Wolf’s definition of our risk culture, where does that leave mothers? Mothers, more than fathers, are often also placed below their children in the social hierarchy. Of course good parenting does require sacrifices and the placing of children’s needs before parents’ on many, even most, occasions. But breastfeeding, argues Wolf, is one area where women are routinely expected to completely ignore their own needs because not breastfeeding is presented as an active risk to their children. In addition, the impact of paternal influence on health and development is ignored almost entirely.

Slogans over images of heavily pregnant women log-rolling or similar, pressure those who wouldn’t take risks while pregnant not to start after the baby is born, which sends the message loud and clear: not only is breastfeeding best, but anything else is actively dangerous

Wolf discusses the concept of ‘total motherhood’, whereby women are held almost entirely responsible for raising perfect, healthy children; and breastfeeding is considered a key component of that. “As mothers,” she writes, “they seem to lose their status as women, or as individuals, and therefore they are not stakeholders in risk assessment.” The risks and trade-offs to women are secondary to the apparent risks to babies, without any consideration of how that in turn could impact on the parent-child relationship (or indeed any other relationships within the family).

As a UK-based reader, I found the discussion of the US National Breastfeeding Advocacy Campaign (NBAC) particularly interesting and I’m only surprised that such an overt presentation of the alleged risks of not breastfeeding wasn’t presented in this country. Slogans over images of heavily pregnant women log-rolling or similar, pressure those who wouldn’t take risks while pregnant not to start after the baby is born, which sends the message loud and clear: not only is breastfeeding best, but anything else is actively dangerous.

So of course the next logical step is to examine the science of breastfeeding. And it makes for fascinating reading.

Wolf’s full summary of her journey through the research is written so well as to be accessible to a layperson without being patronising. She carefully shows why few studies manage to assess the effects of breastfeeding in a reliable way, because they fail to separate the act from other confounding influences on the health of babies. And among those that are more reliable measures, only one area shows any sort of convincing advantage for breastfed babies: the study of gastrointestinal infections referred to earlier.

When so many women have physiological, emotional, cultural and socioeconomic issues with breastfeeding, are even the few apparently proven benefits enough to justify the frightening language of risk aversion that surrounds pro-breastfeeding campaigns?

Certainly there are political and other reasons to object to formula feeding, especially considering its history of development as something to further medicalise motherhood – but Wolf does not begin to defend formula feeding for its own sake, or even to argue about which is more appropriate. Her entire point is that this should be down to the parents who should be provided with clear, accurate and not overstated information to make their choice.

As women and feminists, it makes sense to support breastfeeding accessibility, if for no other reason than to allow women to make the choice to breastfeed if they want to. Middle class women breastfeed more than working class women because they have the luxury of choice: when you can afford a long maternity leave (or any leave), followed by a working environment in which you can request a place to pump and store milk, you’re much more likely to continue breastfeeding than if you have to return to a minimum wage job quickly.

Women in higher-paying jobs will, on the whole, have greater confidence in their job security, even in the current financial environment, to request these measures. Additionally those privileged women will spend more time looking after their children at home and are likely to have access to childcare that involves small groups of children, such as a nanny. Obviously when a child is not part of a larger group of children in a day care setting, they are less exposed to illness. The children of more affluent households are also likely to have other health and healthcare-related advantages.

So equally, as women and feminists, it makes sense to explore the reasons why women are encouraged so determinedly to breastfeed. If there is little compelling scientific evidence for its benefits, are we not just pandering to risk culture panic and heaping yet more stress on mothers, particularly working mothers? When so many women have physiological, emotional, cultural and socioeconomic issues with breastfeeding, are even the few apparently proven benefits enough to justify the frightening language of risk aversion that surrounds pro-breastfeeding campaigns? Wolf draws some timely comparisons between pro-breastfeeding claims and ‘obesity epidemic’ rhetoric that are very apt.

“Breastfeeding,” claims Wolf, “sits at the intersection of public discourse on science, health and personal responsibility.” Whatever your views on the subject of breastfeeding, that powerful and, I think, accurate statement alone is reason enough to explore the science of breastfeeding better.

The question, it turns out, isn’t “breast or bottle?” or even “is breast best?” but “are we giving parents the straight facts?”

Alexandra Roumbas Goldstein is a mum, blogger, editor and charity online community manager. In the best traditions of the internet she loves technology, cats, reading and baking.