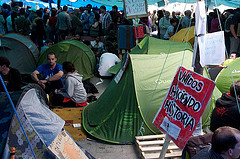 According to the BBC, the sit-in started six days ago “as a spontaneous sit-in by young Spaniards frustrated at 45% youth unemployment.” Al Jazeera informs us that some of these young people have been dubbed ‘”los indignados” – “the indignant”. Not bad at all, that one.

The crowd has been steadily growing, and similar demonstrations are being staged in other cities around the country. The BBC claims “such a spontanious display of protest was unlike anything seen in Spain before.”

Voice of America reports that many of the protestors “say they’ve been inspired by similar protests across the Arab world.”

Why is this sustained mass sit-in happening in Spain and Madrid, but didn’t in London despite the ‘Arab Spring’, Rahila Gupta’s call to action , over 250,000 people< /a> coming out for the 26 March protests, and the attempt to start a weekly 24 hour occupation of Trafalgar Square after the protests? The last one was May Day weekend from what I can find – does anyone have more information?

Photo of tents and people from Puerta del Sol sit-in on 19 May 2011 by fotographer, shared under a Creative Commons license