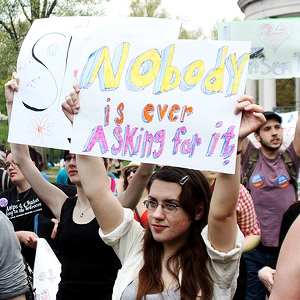 Ray Filar is a feminist writer. You could follow her on twitter at @rayfilar, if you like your regular doses of gender-oriented anger in easily digestible chunks. She also writes a blog called Political Correctness Gone Mad

Where serious consideration of rape is concerned, public ignorance, silence and disinterest has held a lengthy reign. But suddenly, a furore has emerged. The global SlutWalk movement has been followed, in quick succession, by sexual assault charges against IMF head honcho Dominique Strauss-Kahn, Ken Clarke’s unapologetic implication that some rapes are less serious than others, Tory MEP Roger Helmer’s victim-blaming salt in the wound and Nadine Dorries MP’s proposal that young girls ‘just say no’ to sexual abuse. As if sexual abuse could be consensual.

Across the pond, two cases hit the headlines. In Texas a female cheerleader known as ‘H.S’, who refused to cheer for the male basketball player who raped her, was suspended from the squad and ordered to pay the school’s legal fees. Then Kansas Republican Pete DeGraaf proposed that women should plan ahead for unwanted pregnancies as a result of rape. He pointed out that he keeps a spare tyre in his car just in case of punctures. Paying for abortion-only healthcare on the basis that one might be raped: just as non-traumatic as keeping a spare tyre in your car. In fact, those two things are almost entirely indistinguishable.

But, for a change, these stories, and the critical narratives about them, are repeatedly making it into the national papers. Indeed, we’re all discussing it. That must be an improvement, right? 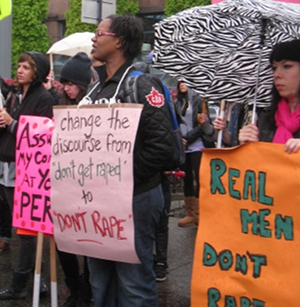 Unfortunately rape apologists (who believe that rape claimants are mostly just deluded about the fact that consent actually really did take place somehow without them noticing) still outnumber the feminists among us. On the other hand, it is pretty notable that in all the above examples strong feminist voices stood up in defence of the right not to be raped, and were counted.

In the case of H.S, a supportive petition is circulating, signed so far by more than 30 000 people. Numerous activists and writers spoke out against the false distinction between ‘serious’ and ‘date’ rape, making the case that rape deniers fear the most: that rape is rape even if different legal sentences apply. The comments underneath Roger Helmer MEP’s blog were unanimously and rightfully angry.

It’s true that rape is being discussed as a serious problem, and that there also exists a slowly building cacophony of voices speaking out against Conservative anti-women policies generally (‘sex is evil and shameful’ groups on the Sex and Relationship Education Council, anyone?) Yet, that’s the real problem in all this. The media inevitably deals with feminist themes in a peaks and troughs manner. Big coverage today and no coverage tomorrow is not enough to stem the tide of ConDem anti-feminism, or to reverse the sexism that was already there.

Much as I would like to believe widespread public discussion signals a change in attitudes towards rape, the reality is that this 15 minutes of discussion may transform few attitudes and enact less real change. These are still societies, after all, in which pop songs about mythological worlds where female children wield great power are contradictorily illustrated with pantheons of semi-clad dancing women. That’s not even to mention some countries where, as we know, rape is not recognised as a crime at all.

Renewed discussion of feminist issues in the media is always better than no discussion at all, but progress requires action at both grassroots and governmental level. Under this government it is clear that few feminist policies can be expected. For grassroots activists and campaigners, then, the pressure is just as great as it ever was.