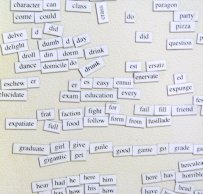 The Importance Of Language

As the ensuing (and justified) Twitter furore indicated after recent comments by Kenneth Clarke and Nadine Dorries regarding rape and abuse, words have power. Especially in the linguistic minefield of discourse surrounding rape and abuse. If something good can come from these comments, it is an appraisal of the importance of sensitive language when discussing these topics.

Kenneth Clarke, as is now commonly known, made the distinction between ‘forcible rape’ and ‘serious rape’. A great deal has been written about this and Jane Martinson succinctly summed up all that was wrong with this for The Guardian.

‘By using words such as “serious” and “forcible” for only some rapes…the most senior legal politician in the country underlines all that is wrong about rape and the criminal justice system in this country. To understand this, just imagine Clarke saying similar things about murder or other kinds of assault. Few politicians or lawyers talk about murder victims asking for it or of assaults that aren’t violent or indeed serious. So let’s start by saying that rape, penetration without consent, is always serious, no matter how much force or violence is used. It is a crime and should be treated like one. The sex offences review in 2004 ruled out separate offences such “she-was-going-to-and-then-she-changed-her-mind rape” or the “she-was-wearing-a-short-skirt rape” because according to Rape Crisis “Rape is rape regardless of the relationship or the context”.’

Dorries too was guilty of a spectacularly insensitive rhetoric – likening saying no to sex as akin to saying no to abuse, thus likening sex to abuse. Displaying a gross misunderstanding of abuse and how it happens – basic reading skills attest that abuse is different to sex. It is abuse. The clue is in the name.

I contributed a piece to CiF regarding Clarke’s comments and a lot of the discussion afterwards referred to my use of the term ‘survivor’ as opposed to ‘victim’ in referring to women who had been raped. It is of course, a known term used in lieu of victim, so as not to revictimise the person you are talking about. It is a term to acknowledge what that person has been through, and that they have come out the other end simply by carrying on afterwards.

And let’s not even get started on the increasing normalisation of ‘frape’.

Words are powerful things and if this horrible cloud has a silver lining – it is a reminder that the language we use has the potential to hurt, undermine and deeply offend – and that in some instances, we need to be exceptionally careful when using it.

Image shared under the Creative Commons license by Windygig on Flickr.