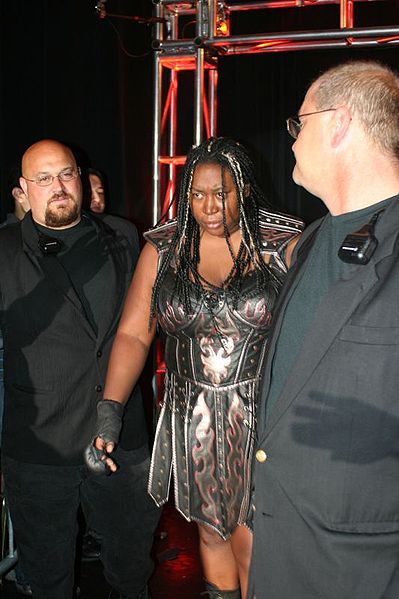 The pregnant pro wrestler: ‘You can’t fully blame it on her’

The magnificent Kia Stevens, otherwise known by her ring-name Kharma, joined the WWE (World Wrestling Entertainment, the biggest pro-wrestling company) at the turn of the year. She’s had a distinguished career all over the world during the past decade.

Now 33, she’s at the peak of her powers, and came into the WWE with great expectations. Fans (like me) were looking forward to seeing the storylines that would be created around this terrific athlete, not just because she’s great in the ring but also because she is very different from the usual petite female competitors – she’s 5 foot 9 and her billed weight is 123kg (for those of you who watched the new series of Gladiators, it’s the difference between the little fitness-instructor-type Gladiators, and the wonderful former Olympic hammer-thrower Shirley Webb aka Battleaxe, except with added hair extensions and breast implants for the little ones).

She spent her first few weeks on screen charging out at the end of matches, selecting an unsuspecting Diva (that’s what they call the female wrestlers) and then dropping her on her face. It was brilliant. The crowd was thoroughly behind her – finally, a female competitor we can cheer for and not feel embarrassed to watch.

Until last week, when Kharma came into the ring, looking as if she was going to drop another woman on the floor again, and instead crumpled to the deck in tears. What was going on?

The whispers started to abound, and eventually one rumour was heard much louder than the others – Stevens is pregnant in real life and would be taking a break from wrestling.

My reaction, though tinged with disappointment at not seeing her compete for a year, was one of genuine pleasure – here’s someone I admire and she’s having a baby, good for her.

My voice was worryingly a lone one. Listening to a wrestling podcast, the male pundits assumed that this pregnancy had to be “an accident”, but you couldn’t “fully blame her” for getting pregnant because she hadn’t had much to do in the storyline for a few months after she signed to WWE – because clearly the idea that she was having a much-wanted baby with her long-term partner could not be entertained; this must surely either be an accident or a deliberate act of revenge against unsupportive employers.

Written content was even more distressing. One columnist called her pregnancy “a tragedy”; commenters laughed about how it is strange that the “least conventionally attractive” female wrestler (I’m paraphrasing) should be pregnant when the “more conventionally beautiful” competitors are not (one comment read: “Who knocked her up? Godzilla?”; another read: “Yes a woman like Kharma is expecting a baby. Can you imagine?” and yet another read: “If she’s pregnant congrats but who in the hell would bang her?”); some repeatedly commented that they “hoped it was just a rumour”; one very pleasant chap said, “She should have taken measures not to let that happen considering she was just debuting”. This one took the biscuit, though –

“Well, moronic timing to get knocked up really. Plus, recovery time for an athlete after a baby is out is about 2 months. So, she’d be out over a year. And bad idea really for her because she and her boyfriend should have used some sort of protection. I mean, it’s not like she’s watching her figure or anything like the other Divas, but she was put in as an important figure with the Divas and now she’s out? Btw, WWE obviously would have known over a month ago if she was prego because of the blood tests they do. Guess they didn’t test her.

And btw, I think if she is out for being prego, that’s it’s the funniest thing in the world. Guys would do every other girl in the WWE Divas division, and the one no guy other than her boyfriend would do, gets pregnant. lol”

Everything that could possibly be offensive, right there in one quote. So even a highly respected wrestler like Stevens – employed because of her physical strength and her difference to the rest of the Divas – still cannot escape being judged by the same heteronormative (and possibly anglocentric) beauty standards.

With all this in mind, I was concerned as to how they would script her exit on last night’s live show – would they just quietly move her aside and never say anything about it again? Would they come up with an elaborate storyline that carefully avoids all mention of the taboo pregnancy?

No. Kharma announced her maternity leave in a very touching, honest way, explaining that she’s fulfilled one of her life’s dreams – to be a professional wrestler – and now she wants to fulfil another – being a mother; and though she is taking a break from competition while she is pregnant, once the baby is born she will be combining motherhood and paid work, just like millions of other women across the world.

Good for her. Congratulations, Kharma.