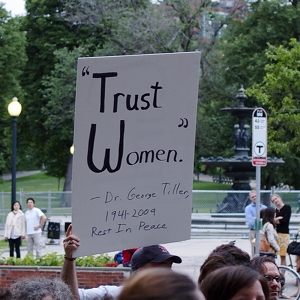 Abortion changes to be snuck in without a vote

The government is seeking ways to make it more difficult for women to access an abortion without bringing the proposal to a vote in Parliament, Liberal Conspiracy reports.

The Department of Health is looking for ways to force women to undergo mandatory ‘counselling’ before getting an abortion by changing existing regulations.

That is they are adopting the patronising proposal by Nadine Dorries and Frank Field in their quest to undermine the right to choose, rather that through the democratic process in Parliament, where it would at least face scrutiny by MPs and the Lords.

They also want to introduce a further ban on abortion clinics giving counselling. As Sunny says:

As BPAS (who have been targeted in this amendment) point out – around 20% of women they offer counselling to eventually chose not to have an abortion.

It’s like saying your doctor should not operate on you because they have an interest in doing so.

We’ve seen this all before in the US. Anti-choice campaigners wear away at one thing after another, till we’re left in a situation where women who miscarry and have stillbirths are being tried for murder, as the Guardian reported only yesterday:

What can we do? Writing to your MP and the Department of Health might be a good start. But also if you’re able to make the Pro-choice demo in London on 9 July, that’s another way to show your support for the right to choose, trusting women to make their own decisions, based on accurate information given out by healthcare providers.

Photo by Tim Pierce, shared on Flickr under a Creative Commons license