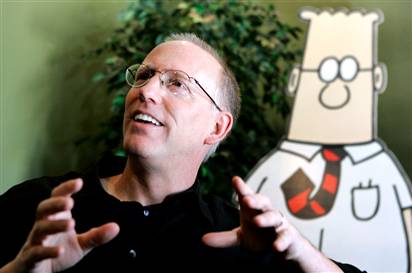 His post (of course) ignited the web community and he bravely opened his blog to feedback asking Salon and Jezebel (of the Lower Reading Comprehension community) to return with feedback. Mary Elizabeth from Salon and Irin Carmon from Jezebel took up the challenge.

Scott Adams is now conceding he may not have everything correct. His latest blog post is asking for people who are judges, lawyers, debate coach/teachers, logic professors, psychologist (professional), and scientist to judge his sanity. I think the reason why he specified these professions is because he considers them to be NOT the lower reading comprehension community.

I encourage you to let him know what you think. I already have and I’ve posted the response here.

BSc in Biology. BSc in Psychology. MSc in International Development. Meaning my day job is trying to figure out why there are people who don’t have enough food to eat in the day.

I have a few points I would like to contest.

1. In one of your emails to Mary Elizabeth, you had explained: “regarding men existing in a state of unfulfilled urges, I’m referring to the fact that men (gross generality alert) have hearts that want a relationship with one person and penises that want a thousand different women. ” I feel you are doing men a disservice with this statement. Despite the generalisation aside, (that you’re not describing all men with this statement), you are describing men as dogs who cannot control their own urges.

Same goes for your comments that women are are biologically less inclined for sexual variety. I would ask that you google “Girl with a one track mind”. Zoe Margolis has never been apologetic about the fact that she LOVES sexual variety and has plenty of it.

But to back it up with science because that’s what you asked for. You’re making the mistake of Biological Determinism. Satoshi Kanazawa frequently makes the same mistakes (despite teaching at the London School of Economics and is currently threatening to have his teaching privileges at the school revoked). Biological Determinism says that scientist actually have no idea what is going on between genetics and behaviour. 1) We cannot use evolution as a reason for people’s behaviour. Scientist actually have not made any links between evolution and behaviour. 2) The interaction of society and genetics is alot more complicated than it seems. If there’s anything I learned from my psychology degree is that no one knows the answers of the link between nature/nuture.

2) In one of your emails to Irin Carmon, you had said: “I have a higher opinion of women than you do, in the sense that I think men are genetically more prone to bad behavior. If your point is that women suck just as much as men, I’ll take your word for it. But you’ll need to explain why our jails have so many more men than women.” If you use this logic, there are also a greater number of African American men in jail than Anglosaxon American men. Would that mean that African american men suck more than anglosaxon men? I think if you used this argument, people would look at you as racist.