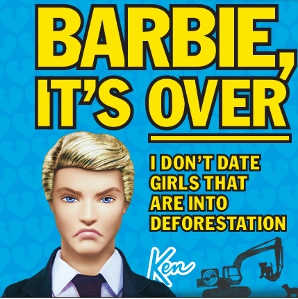 Greenpeace’s new campaign to protect rainforests in Indonesia from deforestation has taken a bizarre turn: blaming Barbie. Not just for the sexualisation of girls, for which the government appears to hold her responsible, but for the wholesale destruction of rainforests by a multinational company.

While many feminists, such as PinkStinks, have campaigned against the unrealistic image of femininity propounded by Mattel and other toy manufacturers, few have gone so far as to personify the doll and blame her for logging, poaching and plastics manufacture. The campaign’s microsite states: “Barbie is on the rampage. She’s trashing rainforests in Indonesia, including areas that are home to some of the last tigers, orang-utans and elephants, just so she can wrap herself in pretty packaging,” implicitly playing on the stereotype of the female shopper ‘on the rampage’, beautifying herself at the environment’s expense.

The campaign, which has bus shelter posters and online video featuring Ken “dumping” Barbie for her “trashy” ways, glosses over the fact that Ken is also, of course, made out of plastic by Mattel, a company largely controlled by male executives, whose business is to sell their products (Ken included) to young people.

Were Greenpeace to roll out a complementary campaign featuring Action Man or GI Joe being court-martialled for his rampages through the rainforest (a storyline actually represented in military action comics based on the characters, whether in WWII-era Burma or Vietnam), it would be an even-handed address – as well as offering a serious point about the socialisation of young men through military toys that implicitly condone violent action with devastating ecological consequences.

No such campaign exists, which leads to the conclusion that Greenpeace is looking specifically to shame female consumers, both parents and children. The coercive ‘shame’ of being dumped by Ken uses a narrative of male moral authority disciplining women for consuming to ornament themselves. While an advertisement that encourages everyone who sees it to recognise and take action about the connections between our consumer habits and environmental degradation by multinationals is welcome, Greenpeace’s use of Barbie-blaming tells a tired story of cherchez la femme, in which it’s venal, appearance-obsessed, fallible women who get us cast out of Paradise. Break up with Mattel by all means, but don’t blame Barbie.