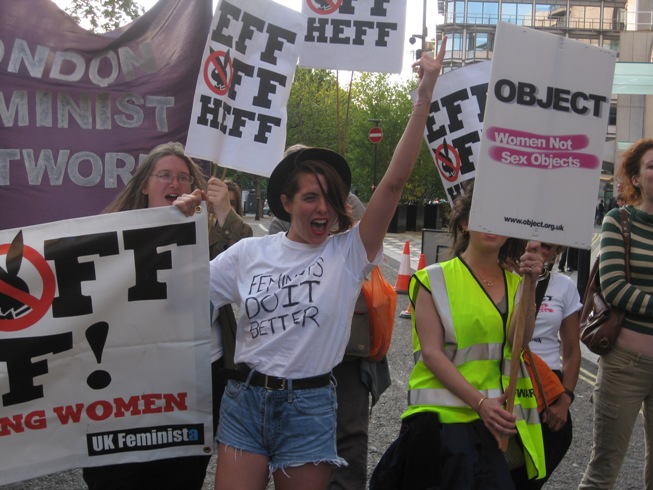 Eff is for feminism!

Greeted by the world’s press, armed with placards, passion, determination and conviction and repeatedly chanting in unison “EFF OFF HEF! STOP DEGRADING WOMEN!” it felt like we were not only physically turning the corner on to Old Park Lane on the evening of the 4th June 2011, but this highly-publicised protest seemed to symbolise a metaphorical turning point for feminism too.

The official opening night of Hugh Hefner’s Playboy club generated mass media coverage in its build-up with news report after news report alluding to the club’s ‘hey day’, a moment in time that pre-dated many of the hard-earned rights that women battled for and benefit from today. However, what was significant about this coverage was the prominent presence of feminist dissent in the form of the EFF OFF HEF! campaign lead by grassroots organisations OBJECT & UK Feminista. The message was loud and clear: there is no place for Hugh Hefner and his sexist, misogynistic Playboy empire – and all that it represents and encourages in the 21st century.

Over two hundred feminists, male & female, young and old crammed onto the pavement and squeezed in behind the barriers perfectly located opposite the entrance to the club in order to personally deliver to Hugh and his Playboy machine their message – a message that was chanted until we were literally blue in the face: – “WOMEN, NOT SEX OBJECTS!” “PLAYBOY BRAND R.I.P!” “WE OBJECT TO SEXIST MEN!” The Playboy machine, clearly not predicting the onslaught was left shell-shocked as they desperately tried to drown us out with loud music – but to no avail. We were not going to be silenced.

Hefner, already in the club (clearly too cowardly to enter from the front entrance), I doubt would’ve been informed of our demands that he ‘showed his face’ and ‘looked us in eye’ or even cared in fact. Nevertheless, he wasn’t able to hide forever and we were to eventually come face to face with our nemesis as he stepped outside and on to the red carpet to pose with the ‘bunnies’ for press photos – a move his PR team will now be regretting as this experience was to be tainted with chants of “DIRTY OLD MAN!” that were to persist until he was ushered back inside. The vilification of Hefner and the sabotage of his club’s opening night filled us with immense pleasure. After all, this is a man who has built his empire on pornography and who, at 85-years-old continues to lure teenage girls into becoming playmate girlfriends and then goes on to sell that idea and brand to schoolgirls in the form of fluffy pencil cases and sparkly make up bags. Can a society that accepts, accommodates and celebrates these actions truly call itself progressive? I wonder how many of his guests that night had asked themselves this question before choosing to join him for the occasion?

However, if we were to measure Playboy’s popularity by the number of guests who did actually attend it would be fair to say it has well and truly had its (hey) day. It certainly didn’t manage to attract the ‘A’ list glitterati it once did back in the Sixties – a positive sign that it isn’t nearly as accepted by wider society as we might have thought. Even so, as long as the Playboy empire – with all it encompasses and contributes to women’s and girls’ exploitation and oppression – continues to permeate our society, feminists will do everything in their power to expose and shame Hefner until our message is understood and supported by the masses.

After 3 hours of relentless protesting, we were to depart, triumphant, with an overwhelming sense of accomplishment, solidarity, joy, satisfaction and empowerment. More poignantly, because of the scale and success of the campaign and the impact we made at the launch, we left with a sense of hope and with the feeling that there really is a resurgence happening in feminism; a wonderfully inspiring movement that is growing in numbers and getting stronger and more powerful by the day. A movement that is simply demanding equality and demonstrating to the world that sexism in the form of Playboy or in any other form is not acceptable. With the brilliance of all involved with the EFF OFF HEF! campaign we made that statement in a tremendous, momentous and symbolic way, as we, united, on the global stage stared in the face of Hefner’s global brand and shouted at the top of our voices that ‘enough is enough’ and if you ‘EFF’ with the FEMS, rest assured, the FEMS are gonna ‘EFF’ with you!

Photo of a group of protesters shouting and carrying placards reading “Eff Off Heff” and “Object: Women not sex objects”, with the London Feminist Network banner in the background.