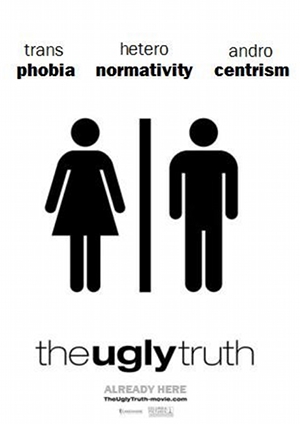 F to M to feminist

*Edited to remove a phrase which really didn’t convey my meaning at all that I added before I’d had my coffee this morning.

Around the time The F-Word advertised for guest bloggers, my partner had increasingly started pointing out “you’re such a militant feminist now.” She seemed slightly amused, slightly confused and of course rather pleased.

It’s partly her doing. She’s very smart, and draws my attention to perspectives and arguments I’ve not yet contemplated. But in the last few years I also feel I’ve learnt a lot about feminism, and been accorded with much more responsibility to be a feminist.

Two years ago I started taking hormones as part of medical transition from female to male. I think it’s fair to say that it’s this transition that made me a feminist.

I’ve been calling myself a feminist since I was about 20. I had my Fawcett “this is what a feminist looks like” t-shirt (which I still wear and which no longer swamps me) but, contrary to what my degree taught me about labelling theory, naming something doesn’t always make it so. If I was a feminist it was only in the most basic of ways – of course everyone should be equal! I had neither the knowledge nor the impetus to develop a deeper understanding, or to work towards that goal, and like many trans-masculine people, I was often unwittingly quite the misogynist.

Transition made it clearer for me how differently men and women are treated. I still socialise in largely queer, feminist spaces, so I’ve not yet

experienced spending much time in exclusively cis-male spaces.* [Edited to remove a phrase which unhelpfuly introduced but left unaddressed the issue of the difference between straight and gay male spaces.] But I realised that for years prior to taking testosterone I’d rarely been afforded male privilege, nor had I been subject to misogyny in the same way my women friends were.

The fact I was being treated a specific way by virtue of my gender not being easily identifiable is of course a feminist issue, but I was shocked into action by the constant sexism that I was seeing and hearing now that as a man I am essentially invisible. After only months on testosterone, people started treating me differently in a way that I still struggle to describe. I was being looked at less, but seen more. I was addressed first when out with female friends, physically related to differently by people. Turns out that people think I’m a man; and maybe that was part of the point of medical transition. But now I’ve come face-to-face what people think that being a man means, I’m not ok with it; nor am I ok with taking advantage of male privilege to get things that other people can’t.

So the only thing to do was to refuse to be complicit, to start calling people out, and to check my privilege while I was at it. It was difficult to figure out the balance at first, the world now being so weighted towards me that much less force was needed to make the same point. I learnt this the hard way the first time I called a friend out on referring to another woman as a bitch.

People worry that FTM transition can turn people into aggressive misogynists, and it can. But it doesn’t have to. Medical transition tried to invite me into a club that not only did I not want to be a member of, but that having seen up close I was now even more intent on destroying. And that’s why I’m a militant feminist.