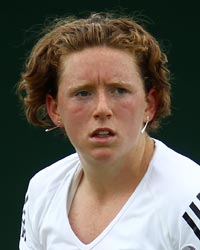 Naomi Cavaday: ‘Women’s tennis is the best sport to be involved in’

This is an extended version of a blog originally written for The Guardian.

It’s the start of Wimbledon fortnight! Strawberries and cream, Pimm’s, rain, Cliff Richard – all that kind of thing. There’ll be all sorts of chat about whether Andy Murray can finally win a grand slam, and there’ll be a lot of focus on the British women, as Elena Baltacha whizzes up the rankings and Laura Robson continues to show immense promise.

One British female player won’t be there. Three years ago this week, as a teenager, she got her third successive wildcard into the Wimbledon draw. She lost her first-round match in straight sets – but she was playing Venus Williams, then the defending champion. Williams was very complimentary towards her young opponent after the match, suggesting that she would be one to watch in the future, given the right training and support.

Now, Naomi Cavaday – still only 22 – has retired from playing tennis, and is preparing to take on a new role as head of the Bromley Tennis Girls’ Academy from September, working with children right through the junior section. “There really aren’t many female coaches around. The men’s side has had a push, and they’ve been doing really well, with money put in and new coaches, and the girls have been left behind. As usual.”

Cavaday isn’t just talking about the junior levels. Last week she wrote an angry blog entry criticising the media’s failure to support women’s tennis. “I was annoyed! They say it all every year. Now I’ve got the luxury, I’m not playing any more, I can say what I want! So I thought yeah, I’m going to.”

She sees her new job as giving her the opportunity to act as a role model for young women interested in tennis. “There aren’t enough female coaches. There aren’t enough female role models [in tennis] in this country. I’ve been thinking about it a lot, and I don’t know why. I think more could be done to encourage coaching, for the players who stop [playing professionally].”

Male ex-players seem to find it relatively easy to make the transition into coaching, but as Cavaday says, women tend to drop off the radar: “I think because people think it’s easier to be successful in women’s tennis. If you achieve a certain ranking and a guy achieves a certain ranking, the guy is seen as being successful and the girl isn’t. She earns a lot less money, and people think it’s easier to do than the men’s.

“I feel like I’ve been successful, making the top 200 [she reached world number 174 last year], and I’ve got something to give. Maybe if I’d reached 500 or 600, I wouldn’t think I could take anyone further than that. If a man had done that, he’d be seen as pretty successful. There’s that general attitude – within yourself as well, not necessarily from outside – you don’t feel as successful as the men do. There’s an attitude that it’s rubbish with girls, and OK with boys.”

Why does Cavaday feel that women’s and girls’ tennis is still perceived as second-rate when compared to the men’s side of the game? “You’d struggle to find any sport where women are the dominant force,” she says. “It’s because of the physical nature, people find it more exciting to watch when men hit the ball harder and move wider. It’s strange. Women’s tennis is the best sport to be involved in. It has the best career potential, earning prospects, fame – there really aren’t that many sports where women have that opportunity.”

Earning prospects are always a hot topic when it comes to women’s tennis – the women get equal pay at the grand slam tournaments, but still receive reduced fees at the tour event. “It’s a significant difference. I’ve not actually met anyone who thinks the same as me – I actually think it should be different at the slams, and the same the rest of the time, because at slams the men are playing more sets, they’re doing more work. I can see how they can justify it at slams, but the difference shouldn’t be that big. Ultimately, it’s a spectator sport, and they’re on court more of the time. The rest of the year? We do the same job. There should be more equality in terms of overall earnings throughout the year.”

She spoke eloquently earlier this year about her battle with eating disorders and depression during her career, and tennis has been riddled with body-image issues in recent years – witness one commentator mentioning 15-year-old Laura Robson’s “puppy fat”, the money raked in by Anna Kournikova because of her modelling rather than her ability on court, the snide comments about the Williams sisters’ muscular frames. Cavaday found herself experiencing these comments when she was a child and was playing tennis for fun. “I was always a little bit heavier. When I look back at pictures now, I think, well, yeah, OK, a bit, but not so much that people needed to talk about it all the time. But I always had those pressures, from when I was eleven or so. It was always talked about. People didn’t really recognise how hard I could strike the ball – they just said I wasn’t fit enough, and I should run twice a week. Well, I was only playing once a week then – I wasn’t going to run twice a week for my tennis! Also, I was 11 – what are you talking about?!”

As she says, tennis doesn’t require any particular body type – just fitness. “The brilliant thing about tennis is you can be any shape or size. It’s not like cycling where every gram counts – you just have to be a fit, strong athlete. You can be whoever you want to be, and you can be an individual – just get the ball over and in.”

She chose to speak out about her depression and eating disorders now because of her new aim to act as a role model, working with the Lawn Tennis Association to improve their pastoral care further as well as her volunteer role as youth ambassador for beat, the eating disorder charity: “I wanted to help other people, to raise awareness of it in sport, and in terms of looking after young girls emotionally and educating them about what this life is like if they choose it. It’s an abnormal lifestyle. I can put that into my own academy now and put that pastoral side in so that they can develop into well-rounded people, so they have that base to fulfil their potential – whether they choose to do that in tennis or somewhere else.”

Even so, she is keen to point out that this didn’t force her retirement. “I’d stopped playing, and it was quite difficult to make clear that hadn’t stopped playing because of those reasons. I’d overcome it and now I’m at a stage where I can make the decision – I don’t want to be doing this any more.”

With eating disorders and depression plus a gruelling tour schedule, was Cavaday ever happy as a professional tennis player? She thinks, and sights. “In parts. Patches. I found it all very difficult, it was a difficult lifestyle, and I was thrown into it very quickly. I took my GCSEs, and a year later I got a wildcard into Wimbledon. I wasn’t prepared for it. I was prepared for training and playing, but it was the life I wasn’t prepared for. If you want to achieve, it’s hard, and you have to make sacrifices, and you need support and a healthy balance. It’s just remembering you’re a person first and foremost. You have to be happy in yourself before you can be a successful tennis player.”

Cavaday is seeking a title sponsor for her girls’ tennis academy – if you would be interested in helping out with funding, you can contact her by email.