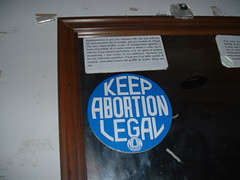 Was a great turn-out tonight at the pro-choice meeting that Sunny and Jess organized.

The discussion was wide-ranging, with some excellent speaking from Diane Abbott MP, Abortion Rights and Education for Choice. I’ll be typing up the notes this week (I hope!).

One of the bits that I raised and that I’d like to talk about more with people is the ethical – and political – case for women’s access to abortion. There was a strong current in the room advocating for taking a scientific, public health approach to abortion rights. They recommended making informed, fact-based interventions to the debates on abstinence education, for example. And some people highlighted how effective this can be, especially where anti-abortion lobbyists are making spurrious ‘pseudo-scientific’ claims and considering how the mainstream majority already believes in the women’s right to choose.

However, some people also made a lot of the fact that anti-abortion lobbyists are operating from a position of ideology, rather than science. While this may be true, I don’t agree that ideology, per se, is a bad thing. Feminism is an ideology. I kind of like it. Moreover science can be marshalled in defence of all kinds of ideologies – including ones I don’t agree with. Science is a tool, and it is not apolitical. Scientists can be political actors, with agendas. The idea that science is the opposite of ideology is not born out by how science is produced, how evidence is gathered, what conclusions we come to through ‘facts’. Enter climate change debates!

Meanwhile, I do not want to lose the ethical, political, and also ideological at times, case for abortion rights and reproductive justice. Women have the right to own and control what happens to their bodies. These rights are enshrined in laws and human rights principles that the UK has signed up to. And all women are entitled to them. For example, regardless of whether ‘life’ is viable at 20 weeks or not (it’s not), women should still be able to legally, safely, affordably access abortion. We should also be able to access abortions after 24 weeks. And we really should be able to access abortions regardless of where in the UK we are located – the restrictions in Northern Ireland are unaceptable. Full stop.

Certainly I understand the benefits of pragmatism and advocating ‘evidence-based policy-making’, as well as why we should equip ourselves and others, including our politicians, with the facts on abortion as we move into this next phase of pro-choice campaigning. Myth-busting and real stories from women who’ve actually had abortions are essential to resist anti-women movements and illustrate how appropriate a pro-choice position is for a fair and humane society. But let’s also remember that our work is political: our rights to our bodies is a contested ideological terrain. Let’s not be so keen to leave this arena lest we suddenly find ourselves out of the conversation altogether.

Photo of a sticker reading Keep Abortion Legal, stuck to a mirror, by wpwend42, shared under a Creative Commons license