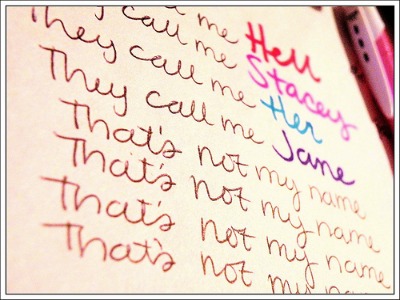 I took the surname Winterson in 1991. As an adoptee I had always felt uncomfortable using my parents’ name and returning to my birth-mother’s name filled me with too much emotion to contemplate. Besides, I didn’t know her at the time.

Jeanette Winterson, the feminist writer and adoptee inspired me and moved me and I named myself for her, inadvertently taking the name of her adoptive mother, the religious nut into the bargain.

Many neat solutions bring their own problems. I am sure that the solution I have just concocted will in time garner its own.

I gave my daughter her father’s surname. It was the kind of groveling good-girl behavior I have to constantly be on my guard against. A cancerous growth in me caused by the twin irritants of a toxic Roman Catholic upbringing and the daily abrasion of being straight in the patriarchal environment.

It was a behavior spurred by the desire to please and readily encompassed dissing myself by suggesting my six-month gestation was a lesser creative act than than my husband’s ejaculation.

I was also a little knocked at the time by having gone into labour 11 weeks early and having given birth standing in the fireplace with my hands on the chimney breast screaming “great mother of God help me.”

With my “incompetent cervix” and my “inability to lactate” I was finding it hard to stay in touch with my goddess-given self belief.

Since she lived- for she did live, on the smallest drop and slightest breath- I am sure a boy would not have done so – I gave her the second name “Hestia” for the goddess of the hearth.

I had the wit not to call her ‘Mary’, the goddess I was really calling on, because as I explained to Our Lady, a Roman Catholic name is not really suitable for a girl-child. She readily agreed.

If this is getting a bit esoteric, bear with me. I haven’t had a coffee yet.

My daughter uses “Hestia” all the time she has double-barreled it to her father’s surname, because at the age of 10 it’s ok to sound posh. Or it doesn’t sound posh anymore, I don’t know which.

I am taking my daughters name to write, to right a wrong I did to myself and because I want to be like her.

And because there is only one writer-goddess called Winterson.

I wrote this on the train.

Photo by i heart him used under a Creative Commons License