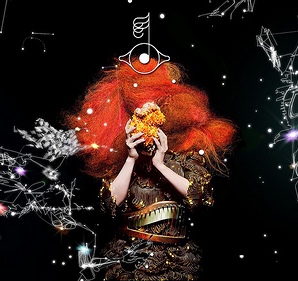 The first time I saw Björk was back in the very early days of her band, The Sugarcubes. Birthday had just been released for the second time and there was a buzz around the group and about Björk’s amazing voice. I had gone to the gig alone because none of my friends had heard of her. I remember being totaly absorbed by the performance, transfixed and enthralled by Björk’s voice and excited about the original music The Sugarcubes were producing.

I only managed to see The Sugarcubes one more time after that and had never seen Björk as a solo performer. So when the opportunity came up to buy tickets for her new show, Biophilia, as part of the Manchester International Festival, running from 30 June to 17 July, I was on the phone and internet first thing, determined to secure tickets. The reviews and tweets from the first night were ecstatic, only increasing my anticipation and excitement about seeing her.

The concert was held in the round at Campfield Market, part of the Museum of Science and Industry. Unfortunately, at three in the afternoon on one of the hottest days of the year, it felt like a giant greenhouse. To add insult to injury, staff confiscated bottles of water from people’s bags on the way in and no tap water was available at the bar, just small bottles at £2 each.

The crowd poured in from 3pm, filling the tiered stands of the venue. The stage, in the centre, contained specially commissioned instruments, which included a giant pendulum harp. Finally, at 4pm, the lights dimmed and David Attenborough’s voice filled the hall. As his voice faded out, Björk arrived on stage to rousing cheers and applause. Wearing an electric blue dress, with huge ruffles, high wedge boots and with an enormous ginger frizzy wig, I mused that if we were hot in the audience, she must be even hotter in that outfit.

I’d like to say I was as blown away by the concert as I had been the first time I’d seen The Sugarcubes. Certainly, Björk’s voice is still as impressive. She can still reach the notes and still has the power that she did nearly 25 years ago. The 24-strong all-female choir, dressed in shiny outfits that looked as though they were lifted from 1970s science fiction dramas, were truly beautiful. Their voices blended together so well that they really sounded as if they were singing with one voice. I couldn’t criticise her musicianship or that of her accompanying musicians. The quality of the sound was good too. Musically, it was wonderful, if challenging at times. The combination of technology, samples and live instruments (especially drumming) worked well but, while I appreciated giant harp pendulum and other novel instruments, I’m not sure how much they added musically to the mix. The visuals were interesting enough, but weren’t particularly ground-breaking.

There was also something missing that stopped me from totally losing myself in this concert, despite its grand concept and technical brilliance. The heat did not help, but it wasn’t all down to that. Having the stage in the centre meant I was looking at Björk’s side or back more often than seeing her face-on. That definitely disconnected me and led me to think it would have been a much more successful show in one of Manchester’s theatres. The venue size was another issue. I find it interesting that publicity for the gig describes the shows as ‘intimate’ despite the huge warehouse setting and an advertised capacity of around 1,800 people (though we think there was probably at least a thousand more than that). While I’m not a big fan of gigs at huge venues, I think they work best when the audience are able to interact – either by singing or dancing, or both. Unfortunately, while the music was brilliant, most of Björk’s material doesn’t lend itself to this sort of audience participation. A huge venue of people standing around just doesn’t create much of an atmosphere for me. So while I did enjoy and appreciate the show, its creativeness and its innovation, it was a disconnected experience and I never stepped over into being carried away by it.

Photo by zaylin14, shared under a Creative Commons Licence

Ruth Rosselson is a freelance writer and consultant based in Manchester. She has been going to gigs for almost as long as she’s been alive. She has an eclectic music taste and also loves scuba diving, her cats and cycling around Manchester. Ideally, she’d like to live in a world where all men and women are equal and where preserving the environment is as high a priority as making money. In the meantime, she’ll settle for one where tall people don’t stand right in front of her at gigs