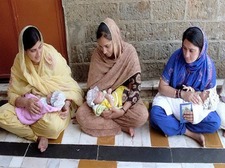 Last Sunday I went to a religious service to celebrate the first birthday of two twin girls. It’s tradition in Sikh communities that the paternal grandparents of a baby throw a party or hold a religious reading to mark the baby’s first birthday. Typically this is only done for male grandchildren, so this was a first for me.

Their grandfather, a family friend, has three other granddaughters in addition to the twins. He had hoped that these twins would be boys, but held the service to show that he was content with what God had given him. He has two sons, who fathered the granddaughters and who are now in their thirties. So he hasn’t missed out completely on watching boys grow up.

During the service, there was a lecture reminding people that female children are just as equal as male children in the eyes of God and we should celebrate this, just as the grandfather was doing. The man giving the sermon also reminded us that Punjab, the state in India where many Sikhs originate from, has one of the highest rates of female infanticide and how just wrong this is. He congratulated the grandfather for holding the event and encouraged others to do the same for their baby girls.

I’m quite proud of the fact that twenty odd years ago when I was born, my father decided to distribute Indian sweets among family and friends, a practise usually only reserved for male babies. Even now, this is simple gesture is rarely done for girls and sometimes the birth of a girl isn’t considered newsworthy enough to announce to the extended family. I’ve often gone to family events where I haven’t seen anyone for a few months to find a few baby girls have been born since the last event.

There is a twist to this story, which makes me angry. The grandfather does have a grandson, but he doesn’t count. The grandson is the son of his daughter, who committed the sins of refusing to get married to a suitable Sikh man and moved around Europe to concentrate on her career. In addition, she hasn’t married the blonde English father of her children. What will happen to these twin girls if they decide they want to have a career like their aunt and never marry when they grow up? As tiny cute babies who can’t speak, it’s easy for their grandfather to say that he loves them dearly. Will he still love them unconditionally and celebrate them if they don’t conform to his expectations? He has set a good example to other members of the Sikh community by holding this event, but I don’t think there will be any more events for baby girls soon.

Image by Rizwan Sagar, used under a Creative Commons License