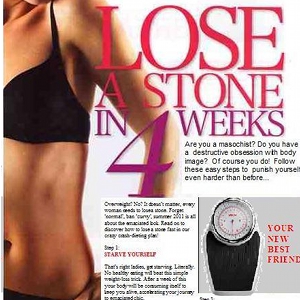 Contribute to a Cosmo parody

Lizzie Dearden has recently graduated and is starting the long struggle towards a career in journalism. She enjoys satire, motorbikes and burning effigies of Rupert Murdoch

The University of York’s Women’s Committee is putting together a parody of so-called ‘women’s magazines’ and we would love writers from outside the university to contribute.

Our magazine will follow the format of a normal glossy, but with the stock articles such as sex tips, relationship advice and fashion pages satirised and transformed to raise awareness of feminist issues and challenge the sexism and misogyny at the core of these magazines.

The project started earlier in the year when our campus was invaded by Cosmo on Campus: a smaller, less glossy version of the magazine giant targeted specifically at female students.

We were more angered and offended by it than regular Cosmopolitan, outraged that a publication that gave career tips such as “build up your makeup kit to take to each job” and “do everything with a smile on your face” was being distributed at universities across the country.

In response, we decided to create our own Cosmo to combat the damaging, unrepresentative, misogynistic messages sent by this magazine and others like it. So if you’d like to get involved email any submissions to [email protected] If it’s funny, feminist and roughly fits the format of a ‘women’s magazine’, we’ll love it.