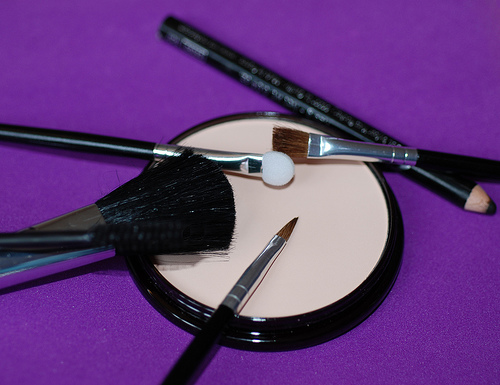 The Guardian today reports on a Harrods salesperson who felt compelled to leave the company after refusing to comply with their requirement for women to wear make-up. Management had no problems with Melanie Stark’s work, and she excelled in a mystery shopper assessment, but was sent home last August when senior managers noticed she wasn’t wearing make-up. The next day, she was put to work in the stock room, and was later told she had to start wearing make-up or quit her job.

This episode blew over, but a few weeks ago she attended a training presentation where staff were told: “Girls, I want you to be made up”. She was transferred to a new store but decided she couldn’t go through all the hassle again and resigned.

The two-page “ladies” dress code stipulates: “Full makeup at all time: base, blusher, full eyes (not too heavy), lipstick, lip liner and gloss are worn at all time and maintained discreetly (please take into account the store display lighting which has a ‘washing out’ effect).”

When she refused she was offered a makeup workshop and told, ‘You can see what you look like with makeup’, she said.

“I was appalled. It was insulting. Basically, it was implying it would be an improvement. I don’t understand how they think it is OK to say that.”

I completely agree with her; the policy is outrageous and offensive. Needless to say, men are not subject to the same requirements.

This is clear sexist discrimination: men’s bare faces are acceptable, women’s are not. Legally, case law apparently supports “the right of employers to impose dress codes with different requirements for women and men provided there were ‘equivalent’ requirements”, but I fail to see any equivalence here. Perhaps the fact that this trend is repeated in workplaces and social settings across the country would provide Harrods with an excuse: after all, in terms of social norms, there is equivalence.

Well, I applaud Stark for breaking this social norm. So many women feel their natural faces are not good enough to be exposed in public, that they must be concealed and enhanced before they can step out the front door, attend a social function, or perform their job in the workplace. Harrods’ code is just one small example of our society’s demand that women simply accept that our faces are not good enough without make-up, and I think we’d all be better off if more of us followed Stark’s example and took a stand against this everyday sexism.

I know I am. I used to be unable to leave the house without make-up, and I eventually decided my life would be much improved if I could be comfortable in public without painting my face first. I forced myself to go for weeks without wearing make-up, until that feeling of being exposed and inadequate left me and was replaced with a new sense of freedom and real confidence – not the kind that comes with a tube of expensive foundation sold by a company that makes its millions off creating and feeding female insecurity. It may seem like a small thing, but the effect it’s had on my self-esteem has been immense.

I of course know and accept that everyone’s different, and not all women will feel the same, but I think many would be surprised at how much better they’d feel if they stopped buying into the beauty myth. The ball’s in our court: if we want to stop body hatred and insecurity, we need to start accepting that, actually, we don’t need make-up.

Photo of a pale face powder with brushes and black eye liner, on a purple background, by incurable_hippie, shared under a Creative Commons licence.